Hello and welcome to CricketCountry’s live coverage of the Ranji Trophy 2015-16 game between Madhya Pradesh and Railways at the Captain Roop Singh Stadium in Gwalior.

Hello and welcome to CricketCountry’s live coverage of the Ranji Trophy 2015-16 game between Madhya Pradesh and Railways at the Captain Roop Singh Stadium in Gwalior. Madhya Pradesh have had a shaky season so far, having played four games with three draws and a win, as they sit in the fifth spot with 11 points. Railways, on the other hand, has had a dreadful season so far as having played five games, they have just managed to win a game, while have lost rest of the four as they sit at the bottom of the table and would be eager to rise above the table and come out of the bottom half.

Live cricket scores Madhya Pradesh 7/2 | Overs 8 | Batting: Rajat Patidar 1(24), Naman Ojha 0(12): At stumps of Day 1 of the ongoing Round 5 of Ranji Trophy 2015-16, the hosts trailed Railways by 249 runs with eight wickets to spare. The two wicket-takers for Railways were Anureet Singh and Karn Sharma who dismissed Aditya Shrivastava and Jalaj Saxena respectively. Earlier, MP bowled out their opponents for 236 earlier in the day. Railways’ opening batsman Saurabh top-scored for his side with 73 from 124 balls. OUT! Aditya Shrivastava LBW Anureet Singh 0(3) OUT! Jalaj Saxena c Mahesh Rawat b Karn Sharma 5(9)

Live cricket scores Railways 211/8 | Overs 68 | Batting: Bhima Appa Rao Pemmi 3(24), Anureet Singh 5(15): 200 Up for Railways! Jalaj Saxena’s six-wicket haul so far in the match has slowed down Railways’ innings and the other Ankit Sharma claimed the other two scalps for Madhya Pradesh. Major runs for Railways came from Cheluvaraj and Saurabh’s bat with the former scoring 79-ball 50 and Saurab top-scored with 73 from 124 balls. The last batsman to get dismissed was Karn Sharma, leaving his side at 201 for 8. OUT! Karn Sharma c Naman Ojha b Jalaj Saxena 11(17)

Live cricket scores Railways 53/1 | Overs 17 | Batting: Saurabh 28(59), Cheluvaraj 7(14): Railways have had a decent start to their Round 5, with opening batsman Saurabh looking good. They have reached their first fifty already with a loss of one wicket. Meanwhile, it was Madhya Pradesh’s Ankit Sharma who made the breakthrough, dismissing A R B Singh in the 11th over. Singh scored 18 from 29 balls before giving a catch to Rameez Khan. OUT! A R B Singh c Rameez Khan b Ankit Sharma 18(29)

In the previous game, Baroda’s Yusuf Pathan gave Madhya Pradesh a mighty scare before the visitor’s rode on Mihir Hirwani and Punnet Datey’s fine bowling to register a 87-run win over Baroda in an exciting Ranji Trophy Group B cricket match. Chasing a stiff 262-run target for an outright win, Baroda were in dire straits at 31 for the loss of five wickets. But then walked in dangerous Yusuf (86 off 98 balls) and in Swapnil Singh’s (47) comapany raised hopes of an improbable victory for Baroda before the challenge fizzled out. Yusuf and Swapnil shared 132 runs for the sixth wicket to raise the hopes of the home team but once the big-hitting batsman departed, the writing was on the wall for Baroda as Hirwani ran through the lower-order to bundle out the hosts for 174 in 48.4 overs, reported by PTI. 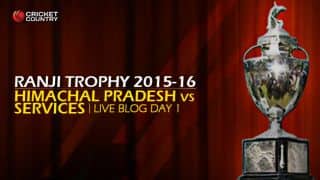 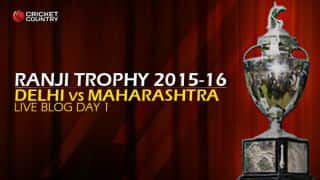