Madhya Pradesh (MP) were seven for 2 at stumps of Day 1 of the ongoing Round 5 match against Railways, trailing the latter by 249 runs. Rajat Patidar and Naman Ojha were on the crease, unbeaten on 1(24) and 0(12) respectively. Railways bowlers Anureet Singh and Karn Sharma struck early in the second innings after their side was bowled out for 256 earlier in the day. MP opener Aditya Shrivastava who has been in a decent run in the league so far was dismissed cheaply for a three-ball duck in the very first over of their innings by Anureet. Meanwhile, Jalaj Saxena who had an excellent day with the ball did not have the same fate when he came out to bat. Karn ended his innings in MP’s fourth over.

Jalaj scored five from nine balls before giving a simple catch to Mahesh Rawat on the fifth delivery of the fourth over which was bowled by Karn. Earlier in the day, the man had shattered the batting line-up of Railways with a fantastic eight-wicket haul. The other wickets were taken by his teammate Ankit Sharma. Their opening batsman Saurabh had top-scored for them with his 124-ball 73.

LIVE CRICKET SCORE Railways 42/1 in Overs 16: End of play at the Captain Roop Singh Stadium in Gwalior, with the touring team Railways taking a lead of 22 runs in their second innings. Madhya Pradesh will have to revisit their bowling plans tomorrow as there is enough time left in the game and they cannot afford to be having too many runs to chase. BATTING: Saurabh 24 (55), Cheluvaraj 8 (29)

LIVE CRICKET SCORE Railways 39/1 in Overs 15: So far so good for Railways in the second innings, with Saurabh and Cheluvaraj stitching up a good partnership to reduce the deficit and help their team take lead. Railways have a slender lead of 15 runs at present. BATTING: Saurabh 24 (51), Cheluvaraj 5 (27)

LIVE CRICKET SCORE Railways 16/1 in Overs 10: Madhya Pradesh were bowled out for 276 and in their second innings, the Railways team has lost their opener ARB Singh for two runs off 12 balls. Madhya Pradesh had taken a crucial lead of 20 runs in the first innings, and they would aim to cause more damage after getting the first wicket. BATTING: Saurabh 10 (13), Cheluvaraj 0 (5)

LIVE CRICKET SCORE MP 276 for 9 in Overs 89.4: OUT!! PANDEY Ishwar Pandey goes for a zero as Karn Sharma picks his fifth wicket giving away 102 runs in his 29 overs. Puneet Datey and Mihir Hirwani is on the crease for MP

LIVE CRICKET SCORE MP 276 for 8 in Overs 89.2: OUT!! BUNDELA Devendra Bundela goes for a steady 47 missing his fifty by just 3 runs. Karn Sharma picks up his fourth.

LIVE CRICKET SCORE MP 252 for 7 in Overs 83.4: OUT!!! ANKIT Ankit Sharma falls for a duck. Karn Sharma picks up his third wicket for the day.Devendra Bundela is batting on 47 nearing his fifty.

LIVE CRICKET SCORE MP 251 for 6 in Overs 82: OUT!!! KHAN Rameez Khan fall for a quick fire 53. Faiz Ahmed was able to get through Khan’s defense.

LIVE CRICKET SCORE MP 240 for 5 in Overs 74: Rameez Khan is nearing his fifty as Railways bowling toil hard to break into the MP lower order.Devendra Bundela is giving good support to Khan batting on 22.

LIVE CRICKET SCORE MP 150 for 5 in Overs 55.4: After scoring a beautiful century Rajat Patidar has perished for 102 in a bid to score quick runs. Karn Sharma picked up his wicket.Anureet Singh struck twice as Naman Ojha who looked out of place went for 29 and Harpreet Bhatia for 8. MP are still 106 runs behind.

LIVE CRICKET SCORE MP 88 for 2 in Overs 28 : Madhya Pradesh have looked solid with the bat in the morning session. Rajat Patidar has done most of the scoring playing well on 73. Naman Ohja is stuck on 9 providing good support to Patidar. MP still trail by 168 runs. 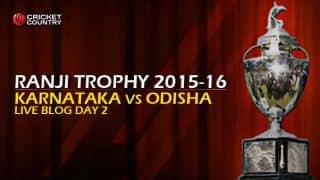