Both Libra Legends and Virgo Super Kings will hope to register their first wins of the inaugural MCL tournament.

Hello and welcome to CricketCountry’s live coverage of the sixth fixture of the ongoing Masters Champions League (MCL) 2016 between Libra Legends and Virgo Super Kings at the Sharjah International Cricket Stadium on Tuesday. Both sides gear up for their second game of the tournament, having lost their only fixture so far to Gemini Arabians and Sagittarius Strikers respectively, and will look to get their first points on the board. The Legends and the Super Kings are led by former South African cricketers Jacques Kallis and Graeme Smith respectively. Kallis replaced former India skipper Sourav Ganguly, who pulled out of the tournament due to back spasm, just before the start of the league.

Live cricket score Libra Legends 163/4 | Overs 20| TARGET 169| BATTING: Ryan ten Doeschate 42 (23), Graeme Swann 3 (3): The match went down to the wire and it was Virgo Super Kings, who held their nerve and came away with a five-run win eventually. The Legends looked well on course to win, but the Super Kings managed to pull off an excellent win. MATCH REPORT

Live cricket score Libra Legends 110/1 | Overs 14| TARGET 169| BATTING: Michael Lumb 45 (41), Ryan ten Doeschate 6 (4): Libra Legends are ahead in terms of runs, but they have just lost the wicket of Kallis for 48, which is a huge wicket at this stage. Murali Karthik has bowled extremely well and thoroughly deserves this wicket. Ryan ten Doeschate is the new batsman for the Legends. OUT! Jacques Kallis c Oram b Karthik 48 (39)

Live cricket score Libra Legends 79/0 | Overs 10| TARGET 169| BATTING: Jacques Kallis 35 (32), Michael Lumb 39 (28): The Legends have managed to keep all their wickets intact and are well on course in chasing this total down. Kallis and Lumb look set at the moment and will look to take their side to a more comfortable position from here on.

Live cricket score Libra Legends 44/0 | Overs 6| TARGET 169| BATTING: Jacques Kallis 28 (22), Michael Lumb 15 (14): At the end of the powerplay, the Legends have not lost a single wicket and are well placed in this chase at the moment. The Super Kings had a chance to dismiss Lumb but Shah failed to hang on to a catch in the deep. VSK desperately need a wicket soon.

Live cricket score Libra Legends 14/0 | Overs 2| BATTING: Jacques Kallis 13 (11), Michael Lumb 1 (1): The Legends have begun their run chase and this will not be an easy target to chase down. Kallis has already smashed Brett Lee for three of boundaries in his first over. He will look to bounce back in his upcoming overs.

Live cricket score Virgo Super Kings 168/5 | Overs 20| BATTING: Hasan Raza 13 (9), James Foster 13 (5): VSK will not be completely happy with the score but will back themselves to defend this total. Hogg was the pick of the bowlers, picking up three wickets for just 12 runs. Legends will hope to chase this down and register their first win of the competition.

Live cricket score Virgo Super Kings 124/3 | Overs 16| BATTING: Azhar Mahmood 22 (13), Jacob Oram 3 (3): VSK have lost a couple of quick wickets in the form of Owais Shah and Graeme Smith. Smith was looking set and would be disappointed not to get a huge score under his belt. Libra Legends will hope to get a few more wickets in the next couple of overs to completely tilt the match their way. OUT! Owais Shah st Ambrose b Hogg 15 (15), Graeme Smith c & b ten Doeschate 57 (42)

Live cricket score Virgo Super Kings 96/1 | Overs 12| BATTING: Graeme Smith 54 (36), Owais Shah 15 (13): Shah and Smith are taking on the spinners and look set to get their team to a huge score. Smith, in the meantime has brought up his fifty of just 33 deliveries and is looking dangerous by the minute.

Live cricket score Virgo Super Kings 73/1 | Overs 10| BATTING: Graeme Smith 41 (30), Owais Shah 5 (7): VSK have lost the wicket of McKenzie, just when he was looking in excellent touch. Brad Hogg strikes in his very first ball of his spell. Owais Shah and Smith will look to cerry the momentum on in the next few overs as well. OUT! Neil Mcknzie b  Hogg 26 (23)

Live cricket score Virgo Super Kings 44/0 | Overs 6| BATTING: Graeme Smith 17 (14), Neil McKenzie 26 (22): VSK are well placed at the end of the powerplay overs. They have not lost a single wicket and have managed to score at a good rate. They will hope to keep their momentum up for the rest of the innings. Smith and McKenzie are hitting the bowlers to all parts of the ground at the moment.

Live cricket score Virgo Super Kings 29/0 | Overs 4| BATTING: Graeme Smith 11 (9), Neil McKenzie 17 (14): the super Kings have upped the ante as McCkenzie too gets into the act and hits a six over third man after playing out a maiden in the second over. Ian Butler at the receiving end this time. He then top-edges one above the slip cordon for a boundary. Immediately fter that he smashes on over the long on fence. This a good start for the Super Kings after winning the toss and electing to bat first

Live cricket score Virgo Super Kings 10/0 | Overs 1| BATTING: Graeme Smith 10 (6), Neil McKenzie 0 (0): The Super Kings get things underway as Smith hits a four and a six of the very first over off Andy McKay. Good start for them. They will look to build on this good start.

TOSS: Virgo Super Kings have won the toss and elected to bat.

Libra Legends are blessed with some of the greatest spinners of their era in Graeme Swann and Brad Hogg of England and Australia respectively. Kallis as well as Netherlands cricketer Ryan ten Doeschate double up as leading all-rounders for their side. The side however, were handed a massive thrashing in the opening fixture of the tournament when they were beaten by the Virender Sehwag-led Gemini Arabians by 78 runs, with the latter finishing on a massive score of 234 for 3.

Virgo Super Kings were disappointing in their approach in their first game of the tournament, with all-rounder Azhar Mahmood being the only batsman to put up a decent score by scoring a 31-ball 51, with the team finishing on a lowly 131 for 9 after 20 overs. 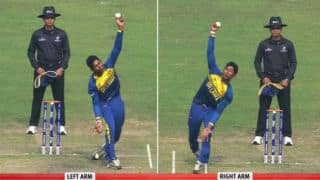