Nepal need a win to move up from the bottom half of Group A.

(Welcome to CricketCountry’s coverage of day five of the ICC World Twenty20 Qualifier 2015. Nepal, currently in the fifth position in the Group A points table, will aim to win their game against Papua New Guinea (PNG), who are in the second position in the table, to get away from the bottom half. They have struggled to deal with the seaming conditions in the past, which reflected in their capitulation for 53 against Ireland four days ago, and they will need to learn to optimise their batting within the circumstances. Catch the live scores and updates of this match live here.)

Live Cricket Score Papua New Guinea 99/2, Overs 14.1, Win by 8 wickets with 35 balls to spare Pala cuts Basant Regmi to third-man, another run. Vala plays another dot ball, this time to mid-wicket. The next ball is played to deep extra-cover, another single. Vala is beaten outside off and cannot get the last ball away. He finds a run to deep fine-leg. There is a dog on the ground. Vala finds a run to long-on as Khadka comes on to send down his last over. Pala slog-sweeps him into the stands, they need a mere 11, two hits, maybe? Meanwhile, they need another change of ball. They get another single. Vala smokes the next to deep extra-cover, excellent fielding, two more, down to single digits now. Vala steps out and smokes it straight into the stands, scores are level, Paras finishes with 4-0-29-0. Pala finishes things off with a massive straight six off the first ball of the next over!

Live Cricket Score Papua New Guinea 72/2, Overs 10, Need 22 from 48, Assad Vala 21(36), Kila Pala 8(11) Basant Regmi switches end, replacing Paras Khadka, and bowls a wide down leg. The next ball is hammered disdainfully past extra-cover for four but is beaten when he goes for the sweep next ball. The next ball is an inside edge, Pala calls and runs, Vala should have been out by a mile but Bhandari’s throw and Regmi’s positioning were both far from perfect. Pala leg-glances for a brace. Gauchan continues. Vala tries to slog-sweep and misses. He goes for a cut off the next ball and is beaten, a wide is called. He cuts the next three balls to point and the two after that to cover.

Live Cricket Score Papua New Guinea 63/2, Overs 10, Need 31 from 60, Assad Vala 16(26), Kila Pala 6(9) It is Paras Khadka again. Vala gives him the charge, stepping out to one outside off and missing completely. Vala slogged one towards deep square-leg, but the ball fell just short of the fielder. They run one, and Pala pushes the next to short mid-wicket as they switch ends. Yet another single to square-leg, this time by Vala. Gauchan replaces Regmi, they need wickets. Vala paddle-sweeps, they get a run. Gauchan beats Pala outside off, but Pala has his revenge, smoking Regmi past extra-cover and cuts thrice to backward-point.

Live Cricket Score Papua New Guinea 55/2, Overs 8, Need 39 from 72, Assad Vala 13(21), Kila Pala 1(2) Paras Khadka continues, and is on target, as usual. The next ball hits Ura on the pad, they steal a leg-bye. Khadka loses direction, it is a wide down leg, good take by Binod Bhandari! Vala lofts the next ball over mid-off for four, that is 50 for Papua New Guinea! Khadka makes a good comeback, sending down three dot balls on the trot. Basant Regmi comes on, and starts with two wides down leg. Then Ura steps out off Regmi’s first legal delivery (a straight, flighted delivery that turns a shade) and misses completely; Bhandari does the rest. Ura falls, can this be it? Kila Pala plays to point for a single to get off the mark. Vala takes a single from mid-wicket. OUT! Tony Ura st Binod Bhandari b Basant Regmi 32(21)!

Live Cricket Score Papua New Guinea 45/1, Overs 6, Need 49 from 84, Tony Ura 32(18), Assad Vala 8(14) Paras Khadka brings himself on. Ura gets a single off the first ball. The second ball jags back in sharply, hitting Vala on the box (or thereabouts). Vala gets off strike with a single to third man, back to the lethal Ura. Khadka follows up with a dot ball. Ura takes a single off the next ball, and Vala takes another off the last of the over. HUGE, HUGE appeal from Sompal off the first ball of the next over, but the umpire reckons it would have missed leg. Vala survives, and takes a single to backward point. Sompal hits Ura’s pad in the next ball. A brutal square-cut from Ura follows, that crashes into the point boundary for four! He flicks the next ball for a single. Vala pulls the last ball for two more.

Live Cricket Score Papua New Guinea 33/1, Overs 4, Need 61 from 96, Tony Ura 25(12), Assad Vala 3(8) Ura and Vala get singles off the first two balls from Sompal. The third ball is outside off and swings away, beating Vala’s edge, this is good bowling from Sompal. The fourth ball is an excellent one, coming in sharply off a length. Vala was cramped for room and was hurried on to the shot. The next ball beat Vala’s inside edge, Bhandari does a mess of it, they run a bye. A simple flick off the last ball from Ura to deep square-leg for a single.

Live Cricket Score Papua New Guinea 13/1, Overs 2, Need 81 from 108, Tony Ura 9(4), Assad Vala 2(4) Sompal Kami comes on from the other end, he will be bowling to Siaka. He strikes second ball! Siaka goes for the almighty heave, and the thin edge goes straight to Binod Bhandari’s big gloves, FIRST BLOOD! Kami bowls a wide down leg. The first ball to Assad Vala is a wide, he square-drives for a single. He is beaten next three balls outside off. OUT! Lega Siaka c Binod Bhandari b Sompal Kami 1(4)!

Live Cricket Score Papua New Guinea 10/0, Overs 1, Need 84 from 114, Tony Ura 9(4), Lega Siaka 1(2) PNG begin their chase with Tony Ura and Lega Siaka. Nepal open with Shakti Gauchan. Gauchan starts off with an excellent arm-ball, but but a wild slog gets Ura off the mark in the second ball. The ball has split, and they get a new ball in the first over, which is somewhat unusual. Ura steps out the next ball and dismisses Gauchan over the straight boundary for maximum! He flicks the last ball of Gauchan’s over past square-leg, two more, they’re racing.

Live Cricket Score Nepal 93 | Overs 19.4 | BATTING: Shakti Gauchan 6(11): John Reva sent down two dot balls to Shakti Gauchan before he managed a single. With the overs running out, Sompal Kami went for the big one. He was completely deceived by Reva’s clever change of place, and took a dolly at mid-wicket. Karan KC joins Shakti Gauchan, and they reach 90 in 19 overs. There is another throw. They ran two, the third umpire was referred to, but Shakti Gauchan made ground. He hit the third ball to deep mid-wicket, it is back to Karan, who tried to go for the big shot, only to edge it to third-man! OUT! Sompal Kami c Assad Vala b John Reva 4(9), Karan KC c Willie Gavera b Assad Vala 0(2)!

for Live Cricket Score Nepal 87/8 | Overs 18 | BATTING: Sompal Kami 4(8), Shakti Gauchan 1(5): The pressure was mounting, for Nepal were not getting the boundaries, and even the singles had dried up. Sompal Kami responded to Basant Regmi’s call, but Regmi fell well short of the crease. The third umpire was referred to, but Regmi was well short. PNG bowlers have been doing a magnificent job here, taking the pace off the ball and bowling a tight line and length. OUT! Basant Regmi run out 1(3)

Live Cricket Score Nepal 79/6 | Overs 15 | BATTING: , Rajesh Pulami 1 (17), Sompal Kami 0 (0): Nepal have consolidated well well but have lost wickets at regular intervals and PNG have been right on top throughout the match and will look to bowl Nepal out as early as possible. And as we speak, Nepal have lost two more wickets. PNG are right on top OUT! Sharad Vasewkar c Assad Vala b Norman Vanua 5 (6), Binod Bhandari run out 4 (2)

Live Cricket Score Nepal 62/4 | Overs 12 | BATTING: Sharad Vasewkar 5 (6), Rajesh Pulami 1 (10): Nepal lose their skipper and now have a humongous task of finishing well from here. They have the ability to do so, but will have to bat out of their skins as PNG have an excellent bowling attack. OUT! Paras Khadka c Pala b Dai 5 (9)

Live Cricket Score Nepal 54/3 | Overs 9 | BATTING: Paras Khadka 4 (7). Three boundaries on the 7th over take Nepal to a good position but PNG strike back as Malla is bowled around his legs off Dai’s first over. Skipper Paras Khadka is the new batsman and he will be key to guide Nepal to a safe position. But Pradeep Airee was dismissed off the final ball of the ninth over. OUT! Gyanendra Malla b Dai 2 (7), Pradeep Airee b Reva 29 (28)

Live Cricket Score Nepal 34/1 | Overs 6 | BATTING: Pradeep Airee 13 (18), Gyanendra Malla 2 (6). Nepal seem to have recovered after the early loss but the running between the wickets has been a touch suspect. PNG have been a touch wayward in their fielding but another couple of wickets at this stage will put them right on top. End of the powerp;ay, Nepal going just around six an over at this stage.

Live Cricket Score Nepal 19/1 | Overs 3 | BATTING: Pradeep Airee 3 (3), Gyanendra Malla 1 (1). Nepal off to a quiet start but PNG have kept things tough nevertheless. Nepal will have to put up a good score to challenge PNG in this match. But Nepal seem to have made a big mess as they have seem to have lost their opener cheaply. PNG will look to get a few more wickets here. OUT! Sagar Pun run out 15 (12)

Toss: Papua New Guinea (PNG) have won the toss and have decided to bowl.

Nepal on the other hand are being lead by Paras Kadka, who along with his players are equally hungry to get a win and make it to the World T20, which is scheduled to be in India in 2016. 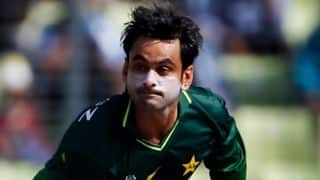