Catch the Live Updates of the 3rd ODI between New Zealand and South Africa here.

McCullum: “It was a good learning experience for us, good opportunity to get some game time.”
AB: “Would have been a great game of cricket. Such a shame.”
The word has come from the match referees that play will not continue any further, after nearly four hours of rain. South Africa win the series as a result and head to Australia for three T20s and five ODIs. The post-match presentation will begin shortly.

Hate to say it folks but not looking too pretty in Hamilton at this stage #nzvsa ^CE pic.twitter.com/osb7AZ116g

Play is yet to begin, and it is most likely that the South African innings will end where de Villiers and de Kock had left it at before the downpour, though it is a speculation at the moment. There will be Duckworth-Lewis calculations however, and New Zealand would have the chance to register a solitary win if they could muster up some hard-hitting during their innings.
We have had an hour’s delay in the game so far, and though there is a mild drizzle at Seddon Park at the moment, the resumption of play is not expected to begin anytime soon. The groundstaff, in the meantime, are doing their best to get the turf in a playable condition as quickly as possibly.
South Africa 157/3 | Overs 30.4
Quinton de Kock 80 (94), AB de Villiers 33 (37)
It has bagun to rain at Seddon Park in Hamitlon, and the ground staff are busy getting the covers in place. South Africa are going strong at the moment and will look to consolidate towards a big total from this point. de Kock has moved to the 80s right now, and will be eyeing his sixth ODI century from here. Skipper de Villiers is also cruising at a steady pace and looks set to bring up a fifty.
South Africa 104/3 | Overs 22
Quinton de Kock 50 (67), AB de Villiers 13 (11)
The South African players and fans cheer for de Kock, who has reached his fourth ODI fifty. South Africa have also crossed the 100-run mark in the process and would hope to maintain the current partnership. AB de Villiers is providing some support from the other side, having hit two boundaries in his innings so far. New Zealand in the meantime are using a medium-pace and spin combination in the form of Mitchell McClenaghan and Nathan McCullum respectively.
South Africa 70/3 | Overs 16.5
Quinton de Kock 33 (47), AB de Villiers 0 (0)
The Kiwis managed to inflict the third blow on the Proteas as they have managed to nip a budding partnership. Neesham bowls a yorker, to which Miller tries to make some room and hit towards the off-side. Wrong shot-selection to blame in this case. South Africa are looking vulnerable at this stage and need a couple of partnerships to lift them from here. The Kiwis on the other hand will look to make the most of the dismissal and take control of the match.
OUT! David Miller b Neesham 17 (29)
South Africa 40/2 | Overs 7.5
Quinton de Kock 23 (21), David Miller 0 (6)
Matt Henry strikes again! This time removes Rilee Rossouw, continuing the latter’s poor run in the series. Henry bowls a short-pitched delivery, which Rossouw tries to play towards the leg-side, but ends up edging it towards the bowler, who takes a superb one-handed catch.
OUT! Rilee Rossouw c & b Henry 0 (6)
South Africa 33/1 | Overs 6
Quinton de Kock 17 (16), Rilee Rossouw 0 (0)
The Kiwis strike early and have managed to remove the dangerous Hashim Amla, who departs for 12. Henry manages to redeem his expensive run in the match so far by getting the prized wicket. Amla gets caught at short mid-wicket by McCullum. Rilee Rossouw to walk in to bat next.
OUT! Hashim Amla c N McCullum b Henry 12 (20)
South Africa 29/0 | Overs 5
Hashim Amla 10 (16), Quinton de Kock 17 (14)
The Proteas are off to a smooth start and are going at a rate of almost six runs per over. Five boundaries have been scored so far, three of which have come from the bat of Quinton de Kock. It is not going good for Matt Henry in his second ODI appearance, as he has conceded 17 runs from the two overs that he has bowled so far.

Toss: New Zealand have won the toss and have decided to field.

Hello and welcome to CricketCountry’s live blog of the third and final One-Day Internaitonal (ODI) between South Africa and New Zealand at Hamilton. This is Amit Banerjee, and I will be bringing you the updates of the match.

South Africa lead the three-maltch series 2-0 and they would be aiming to register a clean sweep against New Zealand. The hosts, who are being looked upon as one of the hot favourites for the ICC World Cup 2015 early next year, will be disappointed with the way they have begun this all-important season.

In the second ODI, South Africa proved why they were the favourites when they landed at New Zealand for the three-match One-Day International (ODI) series by winning the second match at Bay Oval at Mount Maunganui by a convincing 72 runs and clinching the series 2-0, having won the first match, held at the same venue as the second,  by a comfortable margin of six wickets.

Hashim Amla was declared the ‘Man-of-the-Match’ for his invaluable knock of 119 from 135 balls, while Luke Ronchi was the pick of the New Zealand batsmen for his knock of 79 from 83 balls. The two teams will now head to Hamilton, where they will clash in a dead rubber. 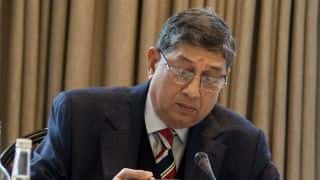 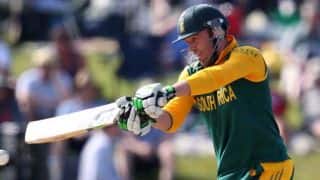