It will be a change of pastures and well as formats for both teams.

(Will Sri Lanka manage to impress in foreign conditions or New Zealand will dominate at home? Catch the live updates of Day 1 of first Test here)

It will be a change of pastures and well as formats for both teams. New Zealand are coming off United Arab Emirates (UAE) after a thrilling 3-2 win in the One-Day Internationals (ODI) over Pakistan while Sri Lanka enjoyed had a special time at home as they drubbed England easily by a big margin of 5-2. The challenge will again start for the Lankans as they will be playing in the alien conditions.

New Zealand 429/7 | Overs 80.3
M Craig 5 (19)
Sri Lanka got a slight lift in the final over of the day as Angelo Mathews got rid of BJ Watling with the second new ball. It was an otherwise grim landscape for the tourists as New Zealand amassed a mammoth 429 for seven at the end of the first day, despite only 80.3 overs being completed.
OUT! BJ Watling 26 (51) lbw Mathews
New Zealand 424/6 | Overs 76
BJ Watling 24 (37), M Craig 2 (6)
New Zealand have crossed 400-run mark, which is a remarkable achievement for them. They have lost a couple of wickets as well, but this total looks quite intimidating.
New Zealand 368/5 | Overs 65.5
J Neesham 57 (61)
Oh no! No double century for Brendon McCullum as he has fallen for 195, five runs short of the fastest-ever double century in Test cricket. Tharindu Kaushal has struck for the Sri Lankans! After
OUT! McCullum c Karunaratne b Kaushal 195 (134)
New Zealand 349/4 | Overs 63
B McCullum 178 (119), J Neesham 55 (58)
Sri Lanka are all at sea with their morale completely down facing the wrath of the Kiwi captain. He is batting brilliantly at the moment and there could be a few records being broken today. Neesham has completed his half-century
New Zealand 310/4 | Overs 58
B McCullum 150 (103), Jimmy Neesham 44 (44)
Brendon McCullum has completed his 150 as New Zealand are on a charge at the moment. More than 30 overs are left in the day and the hosts are already past 300-run mark.
New Zealand 300/4 | Overs 57
B McCullum 149 (102), Jimmy Neesham 35 (39)
Brendon McCullum hasn’t let the loss of Kane Williamson or the tea interval break his rhythm as he has continued batting in the same vein as he did in the previous session. McCullum also brought up a unique feat en route to his century, becoming the first Kiwi to register a 1,000 Test match runs in a calendar year. New Zealand have crossed the 300-run mark in the process maintaining an incredible run-rate of over five runs an over. McCullum smashed Suranga Lakmal for a staggering 26 runs in the 55th over of the innings.
New Zealand 214/4 | Overs 47
B McCullum 101 (75)
Brendon McCullum has brought up an 11th Test match hundred in the blink of an eye. McCullum got to the land mark in a mere 74 balls. New Zealand raced past the 200-run mark before losing the wicket of a well set Kane Williamson.
OUT! Kane Williamson b Prasad 54 (98)
New Zealand 178/3 | Overs 43
Kane Williamson 51 (94), B McCullum 70 (60)
Brendon McCullum has raced past fifty, where as Kane Williamson’s held anchor at the other end. Williamson too has brought up a well earned half century. The duo are closing in on a hundred run partnership for the fourth wicket. New Zealand are rollicking along at more than four runs an over.

New Zealand 140/3 | Overs 36
Kane Williamson 44 (74), B McCullum 40 (36)
Brendon McCullum has started really well here. He has managed to reach 40 off just 36 balls while his partner has slowed down a bit after reaching the 40s.
New Zealand 117/3 | Overs 31
Kane Williamson 43 (58), B McCullum 18 (22)
Sri Lanka have managed to get the big wicket of Ross Taylor just after lunch. There was a mix-up between Williamson and Taylor and Taylor has ran himself out. Brendon McCullum, the captain of the New Zeland team has come on to bat.
OUT!! Ross Taylor run out (Kaushal Silva) 7(8)
New Zealand 84/2 | Overs 23
Kane Williamson 34 (36), Ross Taylor 3 (4)
That’s Lunch on Day One. That was an even session but Sri Lanka would be more happy having picked up the wicket of the New Zealand openers.
New Zealand 79/2 | Overs 22
Kane Williamson 30 (32), Ross Taylor 2(2)
Sri Lanka have managed to pick another wicket. Tom Latham is the man who is dismissed by Shaminda Eranga. It was pitched on the leg stumps and Latham who wanted to turn it down to the on-side got a leading edge to the point fielder.
Out!! Latham c Kaushal b Eranga 27(65)

Morning… Good start to the test match. Need to keep the pressure on the NZ batters. So happy for PHD Kaushal who get his first cap.

TOSS: Sri Lanka have won the toss and opted to field. 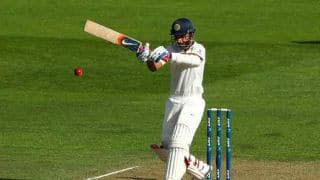