After facing defeat in Test series and One-Day International against New Zealand, Sri Lanka will look to make a comeback in the Twenty20 matches

Sri Lanka remains top-ranked in Twenty20 matches, but has lost three of the five T20s they played since 2014 World T20 triumph. New Zealand have to prove their stance as this is the only T20 match that remains on hand for the Kiwis before the ICC World T20I series begins in March. On 5th One-Day International, New Zealand’s Matt Henry helped the hosts to turn the series by picking 5 for 40, while Martin Guptill scored his tenth ODI century which drove New Zealand to 294 for 5. Guptill was supported by Kane Williamson and Ross Taylor contributing 61 apiece. LIVE FULL SCORECARD: New Zealand vs Sri Lanka, 1st T20I at Mount Maunganui

Tren Boult managed to pick 3 for 43 in his first game of the series. Angelo Mathews on the other hand picked 3 for 33. Dinesh Chandimal struck 39 from 22, though he did not receive any helping hand on the other end from Sri Lanka. His runs did provide a platform for Sri Lanka, but did not accelerate there on. 4th ODI was interrupted by rains at Nelson and was restricted to 24 overs match, but could only play nine overs with rains lashing out the game once again. The Kiwis were 75 for 3, with Taylor and Guptill on crease. Nuwan Kulasekara’s Yorker headed for middle stump and out was Guptill. Sri Lanka did get the hang of the match in the middle with Dusmantha Chameera picking Williamson. The series remained 2-1 with New Zealand leading in the series. LIVE CRICKET SCORE: New Zealand vs Sri Lanka, 1st T20I at Mount Maunganui

The crucial match was on the 3rd ODI match, which helped Sri Lanka revive from their last two defeats. Tilakaratne Dilshan struck 91 which helped Sri Lankans to pose a target of 277. Another commendable play was by Danusha Gunathilaka who struck 65 and Lahiru Thirimanne remained 87 not out. For the kiwis it was Guptill who played his best with 59 runs. Sri Lanka received some joy winning by 8 wickets and 22 balls to spare. 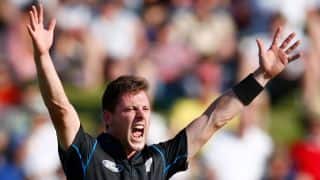 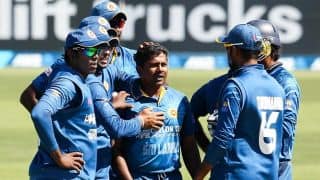