Hello, good morning and a very warm welcome to CricketCountry’s live cricket blog and updates’ post of what will be the final match of Australia versus Pakistan.

Hello, good morning and a very warm welcome to CricketCountry’s live cricket blog and updates’ post of what will be the final match of Australia versus Pakistan five-match ODI series, at the Adelaide Oval. This is Devarchit Varma, and I will be bringing you the live cricket scores and live cricket updates from the fifth ODI. Australia took an unassailable lead of 3-1 with an 86-run victory in the fourth match at the Sydney Cricket Ground (SCG), and their aim will be to finish on a winning note. On their part, Pakistan will look to make amends and try and register a consolatory victory before heading home.

It has been more or less a one-way traffic in this ODI series. Pakistan did conjure up some inspirational performances with both bat and the ball in the second ODI to register their first win on the tour, but they have gone the downward spiral since. Pakistan have done horribly across departments, and their lack of discipline and execution of plans have spoiled their chances of winning this ODI series. With the fate of the series already decided, Pakistan will aim to play freely and put the hosts in pressure on what is expected to be a packed Adelaide Oval on Thursday. FULL CRICKET SCORECARD: Australia vs Pakistan, 5th ODI at Adelaide

Australia will be pleased with their performances so far in this series, as they have remained consistent despite a minor blip in the second ODI at Melbourne. Australia understand the values of setting up big targets, and their strategy will remain the same at Adelaide Oval, which is expected to favour the batsmen a great deal.

Pakistan, on the other hand, will have their hopes pinned on the likes of Sharjeel Khan, Babar Azam, Junaid Khan and even Mohammad Aamer. In the fourth ODI, Hasan Ali had taken a five-wicket haul — the first by any Pakistani bowler in Australia since June 2002 — but the two dropped catches came back to hit the visitors hard.

Pakistan have not given any opportunity to Rahat Ali in the 50-overs contests, who had featured in the Test series. They might opt to rest Aamer, who has featured in all matches that Pakistan have played so far in this series. Wahab Riaz is another bowler who got only one chance — in the first ODI — but his indiscipline may provide hindrance in his selection.

The situation has become worse for Pakistan as they have spilled sitters, misfielded, given overthrow runs, and have not taken DRS interventions at the right time.  If Pakistan decide to change and put their best foot forward, they may head home with something to cheer about. 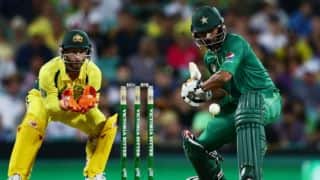 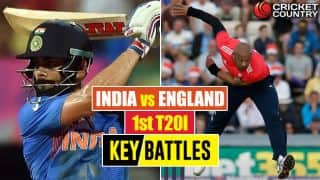