Welcome to CricketCountry’s live coverage of the first Twenty20 International (T20I) between Pakistan and England at the Dubai Sports Complex.

By Vishal Mehra and Rishad DSouza

Hello folks! Welcome to CricketCountry’s live coverage of 1st Twenty20 International (T20I) between Pakistan and England at the Dubai Sports Complex. I, Vishal Mehra along with Rishad D’souza will be  with you to bring updates and scores of the match. Having lost the One-Day International (ODI) series to England, Pakistan will want to avenge their defeat. Skipper Shahid Afridi will hope that the ODI defeat does not hamper the confidence of the team who had earlier won the Test series. Pakistan will be strengthen with the inclusion of Umar Akmal, Sohaib Masood and Sohail Tanvir. England would high on confidence after their triumphant victory in the ODI’s. Who would prevail in this exciting series? Catch all the updates here. LIVE CRICKET SCORECARD: Pakistan vs England 2015,1st T20I at Dubai

Live cricket scores Pakistan 146 | Overs 20 | Batting:  Sohail Tanvir 25(22): Fantastic game of cricket in the end after taking a seemingly one-sided course. Pakistan’s lower order batsmen Tanvir and Wahab Riaz were involved in a partnership that threatened to snatch the game away from England but in the end the task was a bit too much for them, credit to them for taking the fight into the last over though. OUT! Wahab Riaz 21(13) c Ali b Topley, OUT! Imran Khan 0(1) c Billings b Topley

Live cricket scores Pakistan 100/8 | Overs 15 | Batting:  Sohail Tanvir 5(6): Pakistan are down and out. A well set Maqsood was done in by a vigilant Moeen Ali in the 13th over when he spotted Maqsood’s intention to advance and slided the ball wide off leg stump line, the result was Maqsood was stumped. In the next over Anwar Ali smacked two big sixes of Parry to give Pakistan something to cheer about, but he was done in by the pace of Plunkett in the following over. OUT! Sohaib Maqsood 24(16) st Billings b Ali, Anwar Ali 20(14) c Morgan b Plunkett

Live cricket scores Pakistan 74/6 | Overs 12 | Batting:  Sohaib Maqsood 24(16), Anwar Ali 0(2): Pakistan’s worries worsen. They were gaining some momentum by virtue of some big hits but it’s all awash in part because of comically horrible running. Umar Akmal and Sohaib Maqsood both were running towards the same end and it resulted in a horrible run out. Shahid Afridi who walked out to great cheer was then dismissed first ball as he failed to adjust to the slow ball. OUT! Umar Akmal 19(14) run out, OUT! Shahid Afridi 0(2) c Roy b Parry

Live cricket scores Pakistan 45/4 | Overs 8 | Batting:  Sohaib Maqsood 7(5), Umar Akmal 3(2): Stephen Parry has made a breakthrough with a lovely bit of guileful bowling. Lured Mohammad Rizwan with a flighted delivery and went though his gate with sharp turn. It’s a struggle for Pakistan here. OUT! Mohammad Rizwan 6(9) b Parry

Live cricket scores Pakistan 32/3 | Overs 6 | Batting:  Sohaib Maqsood 7(5), Mohammad Rizwan 0(2): Pakistan find themselves in deep water here. Liam Plunkett increases their misery in the very first game he gets on this entire tour. Rafatullah Mohamad got a snorter of a short ball from him and he only managed a nick to the keeper in his pull shot attempt. Rafatullah Mohmand 16(20) c Billings b Plunkett

Live cricket scores Pakistan 22/2 | Overs 4 | Batting:  Rafatullah Mohmand 11 Mohammad Rizwan  : Plunkett final ball of the over  to Mohammad Hafeez and he connects a good pull shot, only to be picked up by the only man in the deep on the leg-side! A simple dismissal for Pakistan and England looking good to start off with.Liam Plunkett picks up his first.

Live cricket scores Pakistan 8/1 | Overs 1.3 | Batting:  Rafatullah Mohmand 6 Mohammad Hafeez : Topley delivers a good bowl as Sarfraz Ahmed goes down on one knee and sweeps it powerfully only to find the fielder at backward square! Topley picks up his first wicket. Mohammad Hafeez comes in to bat, will want to continue his Test form.

WICKET! Sarfraz hits Topley high into the leg side, but straight to Plunkett! https://t.co/xqhCK0RBy5 #PAKvENG pic.twitter.com/KpvrGq5dGe

Live cricket scores England 160/4 | Overs 20 | Batting:  Eoin Morgan 41*  :OUT!! Sohail Tanvir bowls his final ball of the innings to Morgan,yes and  no, it’s a dot ball (and a run out) as Morgan swings across the line of a slower ball.Sarfraz gathers and hits the stumps underarm as they try to steal a bye. Sam Billings goes for a well made 53 from just 25 balls.

Live cricket scores England 119/4 | Overs 17 | Batting:  Eoin Morgan 37 Sam Billings 14 : Morgan looks to play the ball all around the park with delicate hitting whereas Sam Billings has looked the unorthodox T20-ish style batsman. Tanvir comes back into the attack as Pakistan will want to restrict England below 140. Morgan survived a scare after being dropped.

Live cricket scores England 95/4 | Overs 14 | Batting:  Eoin Morgan 32 Sam Billings : OUT!!! Wahab Riaz  yorks Vince who was nearing his 50.  That over deserved reward, excellent pressure built on by Wahab Riaz. Vince has a heave across the line and the off stump gets struck. Vince was looking dangerous.

WICKET! You miss, I hit! Vince is bowled by Wahab for a fine 41. More here: https://t.co/xqhCK0RBy5 #PAKvENG pic.twitter.com/IrPnTV7tub

Live cricket scores England 67/3 | Overs 10 | Batting:  James Vince 29 Eoin Morgan 18 : Vince and Morgan have looked in good flow hitting the bowlers for fours and sixes. Partnership has already crossed the 50 run mark. Shahid Afridi is desperately looking for wickets. With the final 10 overs England will look to score big and get across 150.

Vince and Morgan going well. How many can England make? https://t.co/xqhCK0RBy5 #PAKvENG pic.twitter.com/5vSQAkh94v

Live cricket scores England 44/3 | Overs 7 | Batting:  James Vince 14 Eoin Morgan 10 : After early wickets England have now trying to build a partnership with debutante James Vince and captain Eoin Morgan. Vince in his short innings has played some beautiful hits over the covers. Skipper Shahid Afridi has come in to bowl and has already bowled a quite over as Pakistan will look to carry on the momentum and pick up quick wickets.

Live cricket scores England 19/3 | Overs 3.5 | Batting:  James Vince 0 Eoin Morgan : OUTT!! Sohail Tanvir takes his second wicket as Moeen Ali trying to find cover! Fantastic start for Pakistan. Moeen comes forward, drives on the up, but picks out cover who just had to move a little to his right and snaffle a simple catch. England are now in big trouble with 3 batsmen  already back in the pavilion.Captain Eoin Morgan comes in to steady England.

Live cricket scores England 18/2 | Overs 2.3 | Batting:  James Vince 0 Moeen Ali  : OUT!! Anwar Ali comes in to bowl to Hales, leading edge and caught at mid-off! Both openers gone now. A back-of-a-length delivery, Hales looking to work into the leg side and the thick leading edge carries at head height to Afridi at mid-off. Moeen Ali comes in to bat are looking in a spot of bother.

Even Pakistan great Shoaib Akhtar is following the match

Live cricket scores England 16/1 | Overs 2 | Batting: Alex Hales 1 James Vince : OUT!! Tanvir picks up Roy after he missed his catch a few balls ago. Short of a length and Roy splices his pull to mid-on where a simple catch is taken. Didn’t get any power or timing on this occasion.

Live cricket scores England 6/ | Overs 1 | Batting: Alex Hales 1 Jason Roy 4 : Alex Hales after a century in the ODI will look to carry his form in the T20I series as well. Jason Roy will also want to gain valuable experience as a preparation for T20 World Cup next year.Anwar Ali has bowled a good over. Anwar had a shy at the stumps only to miss out closely.

Alex Hales puts in a dive as Anwar attempts a run out in the opening over. England 6-0 after 1 over #PAKvENG pic.twitter.com/JvvDFzFBX3

.@Eoin16 won the toss and England are batting #PAKvENG pic.twitter.com/oIbVRt9hHp

Shahid Afridi pictured with Nick Knight in a pleasant mood ahead of the first T20I match. pic.twitter.com/UzZYjddSWz

Pakistan is having successful T20I year winning series against Zimbabwe (home and away) and Sri Lanka (away) will want to finsnish off in style.This would give them perfect confidence heading into Asia Cup Twenty20 edition and T20 World Cup in Bangladesh and India next year. England have won both the T20I they have played this year (against New Zealand and Australia), will look to get ideal practice for their young and inexperienced side at international level. Pakistan and England have won their respective tour T20 matches against Hong Kong and UAE.

Pakistan are currently ranked No. 2 and England are ranked 8th in the ICC T20 ranking. The first T20I between Pakistan and England is to be played on Thursday at the Dubai International Cricket Stadium (DSC) 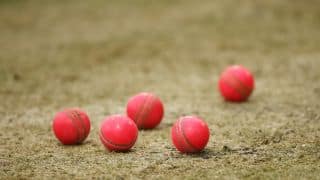 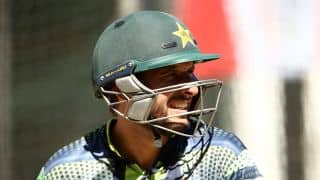