(Pakistan and New Zealand clash in the fifth and deciding ODI which currently stands leveled at 2-2. Catch live cricket score of the match here)

Hello and welcome to CricketCountry’s live coverage of the fifth One-Day International (ODI) between Pakistan and New Zealand here. I am Pramod Ananth and I will be bringing all the updates of the match.

OUT! All over at Abu Dhabi. New Zealand beat Pakistan by 68 runs and win the series 3-2. Pakistan are all-out for 207 in the 44th over. Adam Milne picks up the last wicket

OUT! Matt Henry gets his first five wicket haul. Afridi holds out at deep square-leg for 13 of 9 balls. Number 11, Mohammad Irfan walks in with Pakistan still requiring 71 from 43.

OUT! Sohail is clean bowled off the bowling of Mitchell McClenaghan for 65 (74). Pakistan are 172/6 in 38.4 Overs. Pakistan still need 104 from 68 balls. Skipper Afridi walks in at number eight.

Sohail reaches his 50 from 66 balls. This is his second 50 of the series. He will be key, if Pakistan are to win this match.

OUT!  Pakistan lose their fifth wicket. He is caught by Guptill at mid-wicket off the bowling Nathan Mccullum. Pakistan ate 117/5 in 30.3 Overs. Sarfaraz Ahmed is the new batsman.

Devcich has left the field after landing awkwardly on his shoulder while attempting to take a catch. Pakistan still need 164 runs to win from 21 Overs.

Shehzad reaches his 50 off 76 balls. Pakistan still need 179 runs to win in 24.4 Overs. Sohail is giving him good support at the other end.

OUT! Pakistan lose their third wicket. Shafiq is out for 7 (13). he is trapped LBW off the bowling of Devcich. Pakistan 38/3 in the 13th Over. Haris Sohail is the new batsman. Shehzad is still batting on 19 (34).

Pakistan score their first boundary of their innings in the 11th over. Shehzad sweeps a ball from Devcich towards backward square-leg.

OUT! Pakistan Lose second wicket with 22 runs on the board. Younis goes for 12 (25). The ball kisses his gloves and he’s caught on the leg-side by Luke Ronchi. Pakistan 22/2 in the ninth Over. Henry gets his second wicket. Asad Shafiq walks out to the middle to join Shehzad.

OUT! Pakistan lose an early wicket in pursuit of 276. Nasir Jamshed is trapped leg before off the bowling of Matt Henry. Pakistan are 0/1 in 0.5 Overs. Younis Khan comes out to join Ahmed Shehzad out in the middle.

Ronchi goes for 16 (12) after trying to go for another six. Afridi takes the catch at cover and Irfan picks up his second wicket. Tom Latham comes out to bat. New Zealand 242/4 in the 47th over.

OUT! Kane Williamson falls three runs short of his 5th ODI ton. He’s gone for 97 off 119 balls, caught by Sarfaraz Ahmed bowled by Shahid Afridi. Luke Ronchi joins Taylor in the middle. New Zealand are 202/3 in the 43rd over.

200 Up for New Zealand in the 42nd Over. Williamson four runs away from his 5th ODI century. Taylor batting on 56.

Williamson and Taylor bring up their 100-run partnership in the 40th Over. New Zealand are 188/2 in 39.4 Overs. This is their fourth 100-run stand in eight innings together.

11 runs were scored from the first batting powerplay over. New Zealand are 166/2 after 36 overs. Williamson and Taylor seem to be in an aggressive mood.

Williamson and Taylor bring up their 50-run partnership in the 33rd Over. Williamson was earlier involved in a 66-run stand with Brownlie. New Zealand are 143/2 in 33 overs.

OUT! Dean Brownlie is out LBW of the bowling of Babar for 34 (51). Ross Taylor walks out to the centre to join Williamson. New Zealand are 86/2 in the 20th over.

Part-time leg-spinner Ahmed Shehzad is introduced into the attack in the 19th Over. New Zealand are 81/1.

Harris Sohail is introduced into the attack in the 14th over. New Zealand are 51/1.

Shahid Afridi replaces Zulfiqar Babar in the bowling attack in the eighth over. New Zealand are 33/1

OUT! New Zealand lose their first wicket. Martin Guptill is caught by Asad Shafiq bowled by Mohammad Irfan for 8 of 9 balls. Captain Kane Williamson walks out to the centre.

New Zealand are 8/0 in the first over. Dean Brownlie and Martin Guptill open the innings for the Kiwis.

New Zealand win the toss and will bat first. Nathan Mccullum and Anton Devcich are back in the side for New Zealand. Pakistan go in for an extra spinner in Zulfiqar Babar instead of Sohail Tanvir and Asad Shafiq too is back in the side.

The previous Pakistan-New Zealand ODI match was a perfect reflection of what has happened in the series so far, a hard-fought battle. The three-match Test series ended 1-1, the same result was obtained in the two-match-T20I series and the ODI series stands leveled at 2-2, with New Zealand having clinched the previous thriller by just seven runs.

Among the runs was Younis Khan, from Pakistan. That was a huge sigh of relief for the veteran who has been struggling in the 50 over format despite stellar performances in Tests. His century anchored the Pakistani innings which looked like it would collapse when he came out to the middle. For New Zealand, skipper, Kane Williamson stood up and scored a calculated century.

Adam Milne, impressed with his pace and didn’t let batsmen get runs easily. His pace and bounce is really something New Zealand would be looking to unleash in the World Cup. 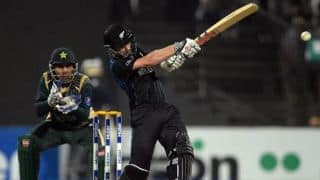