Zimbabwe have already lost the series, following their six-wicket loss in the 2nd ODI at Lahore.

(Can Zimbabwe finish the series on a high, claiming their only win of the tour, or shall Pakistan earn a clean sweep and make it 3-0? Catch all the updates here.)

And on a day that Zimbabwe looked exceedingly competent and were in with a realistic chance of victory rain has washed their hopes away. Meanwhile Pakistan will be equally distraught because now there is a possibility that they don’t make it to the ICC Champions Trophy 2016. So the historic tour attempted at reviving cricket doesn’t conclude on a right note. But that doesn’t take away from the efforts put in by both side. Pakistan may have won all the matches but the scoreline doesn’t reveal all. Zimbabwe punched above their belts and were competent for major part of the series to make it a memorable one for Pakistan, Pakistanis, themselves and the cricket world at large. Match Report: Pakistan vs Zimbabwe, 3rd ODI at Lahore

Rain has gotten heavier at Lahore. A wash out will be disappointing from persepctive of both sides, since Pakistan are looking for a win to strengthen qualification chances for the ICC Champions Trophy 2016 and for Zimbabwe because they genuinely seemed to be in a winning position.

Zimbabwe have started brightly. Not only Chibhabha but even Vusi Sibanda is playing quite confidently, which is a pleasant relief after his laborious innings in the previous game. Both batsmen have shown positive intent and are scoring at more than run a ball. Pakistan need a breakthrough.

Eventful last couple of overs. Zimbabwe get a couple of wickets but they are pretty much inconsequential as Anwar Ali and Wahab Riaz have done the damage. Riaz got out in the 49th over after smashing a short ball to midwicket for six. Anwar Ali stayed on till the end and ensured a good finish for Pakistan. Junaid Khan plummeted the final ball for FOUR, which took Pakistan to a respectable score of 296. There’s an exciting chase on cards.

That was quite a nice over by Panyangara spoilt by one full toss in the fifth ball of that over. Anwar Ali smashed the full toss over long on for a huge six! Pakistan now have quite a decent score to play with and there still remain two overs.

So Pakistan have breached the 250-run mark with some authority which is commendable since they lost so many wickets. Anwar Ali is getting in on the act. Babar Azam meanwhile couldn’t have asked for a better debut knock. Mpofu bowled the 47th over quite well, got his yorkers right and procured the leading edge off the fifth ball but it fell safe. He then bowled a horrible full toss but it gets the wicket. Babar Azam plays it on! Wahab Riaz is the new man in.

And that is a very special knock by Babar Azam; fifty on ODI debut and in a crunch situation. Zimbabwe will need to get him out quick to maximise their chances of stealing a victory in the concluding match of the series. Anwar Ali is batting quite nicely at one end.

Babar Azam playing a very important innings on debut here. He’s nearing his fifty and if he retains his wicket till the end, Pakistan even have a chance to post 280-290. Anwar Ali is supporting him quite well at the other end. It is key for Zimbabwe to bowl Pakistan out.

The Zimbabwean spinners are making an impact here. Graeme Cremer has removed Hammad Azam for four runs. Zimbabwe are right on top of this contest at the moment. Anwar Ali is the new batsman in.

And Sikandar Raza has picked a third wicket! If Zimbabwe go onto win today, they have a mon of the match candidate in Raza already. Pakistan are looking to accelerate but that wicket will check them for another couple of overs.

And now we’re into the last 15 overs of the innings, but the batsmen will look to steady the innings a little before going for the shots since they have already lost quite a few wickets.

And another run out! What is Pakistan doing here? Zimbabwe are well on top now. Their spinners have done very well and the pressure is showing in the way the batsmen are getting out. Shoaib Malik set off for a risky couple of runs after tapping the ball to square leg but the fielder swooped in and an accurate throw caught Malik short.

Sikandar Raza is having a ball here, first he got Mohammad Hafeez’s wicket and now he’s got rid of Asad Shafiq. Shafiq was struggling to get going and has perished in attempt to chip the ball over short mid-on. Pakistan under serious pressure now.

Asad Shafiq slightly nervy early on. The spinners, Graeme Cremer and Sean Williams, have done very well to maintain the pressure. Mohammad Hafeez, who was batting well and looked primed for his hundred has been dismissed for 80 by Sikandar Raza. Now Zimbabwe have a real chance to tighten things further. Debutant Babar Azam is the new batsman at the crease.

Zimbabwe’s search for a wicket has borne fruit finally in form of run out. Azhar Ali, the skipper, has to depart a few runs short of his fifty. He was victim to some fine bit of fielding by the fielder at cover. Hafeez hit the ball and the batsmen set off for a risky single but quick collenting and direct throw caught Azhar short at the striker’s end.

Mohammad Hafeez has decided to free his arms and in the process has reached his half century faster than Azhar Ali. Skipper Hamilton Masakadza decided to give himself a ball but has been taken for nine runs off that over. Nothing happening for Zimbabwe here. They desperately need to break this partnership to have a chance in the game.

Graeme Cremer is bowling quite accurately. In the last match, he was the silver lining for Zimbabwe in an otherwise abysmal display with the ball. However, Chibhabha has been quite loose in his line and length. Azhar Ali is batting beautifully, his feet movement has been impressive. Hafeez has looked shaky occasionally.

Chamu Chibhabha and Graeme Cremer have replaced the opening bowlers. Cremer has just bowled an over and conceded eight runs, but he’ll be key for Zimbabwe as he bowled very well in the previous match. Chibhabha has been far from impressive in his three overs so far. Azhar Ali and Mohammad Hafeez are quite well settled now and have begun to attack the bad balls.

And the toil continues for Zimbabwe but no fruit for them yet. The two openers are growing in confidence and against a bowling attack so weak, they’ll hope to score big. To his credit, Panyangara has kept a tight line and length but has not had the pace or movement to take wickets.

Pakistan are off to a steady start. Zimbabwe’s bowling has been dismal throughout the tournament and they haven’t looked very threatening today. The Pakistani batsmen have looked just a little shaky on occasion but are not facing many troubles besides that. Panyangara has bowled reasonably well but Mpofu has erred one time too many.

Toss: Pakistan have won the toss and elected to bat first.

Hello and welcome to CricketCountry’s coverage of the 3rd ODI between Pakistan and Zimbabwe at the Gaddafi Stadium in Lahore on Friday. I am Rishad D’Souza, and I will bring you the live updates from the match, which will be their final match of the three-match series. READ: Pakistan vs Zimbabwe 3rd ODI at Lahore, Preview

Zimbabwe have already lost the series, following their six-wicket loss in the 2nd ODI at Lahore. Pakistan skipper, Azhar Ali scored a match-winning century in order to seal the victory for the hosts, following an embarrassing 3-0 whitewash at the hands of minnows, Bangladesh last month.

Zimbabwe, on the other hand, has had a terrible season since last year, and also failed to fire in the ICC Cricket World Cup 2015 in Australia and New Zealand this year. Although they have shown the courage to tour the troubled nation, their courgae to lead a fight-back has faded in the game itself.

Following the end of the 2nd ODI, there was a reported incident of a suicide bomber creating an explosion outside the stadium, leading to injury of four policemen. However, despite the incident, Zimbabwe Cricket have confirmed that they scheduled tour would go on and would indeed be completed with the 3rd ODI. 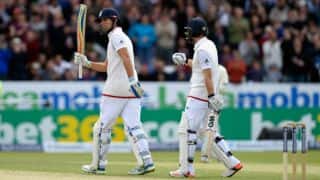 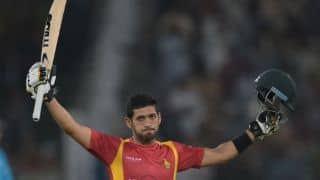