Royal Challengers Bangalore (RCB) scored 157 in their allotted 20 overs against Delhi Daredevils (DD) in their IPL 2012 match in Bengaluru on Saturday. 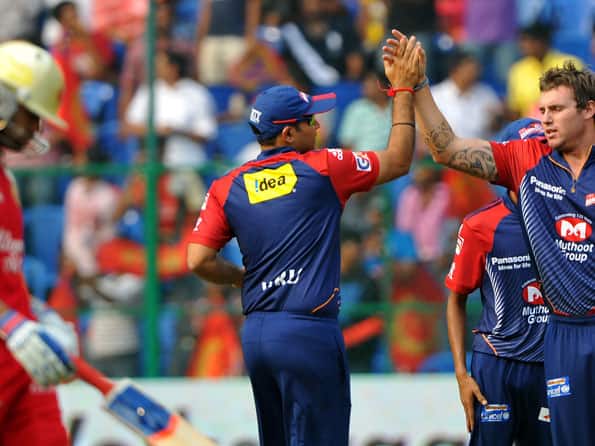 Delhi Daredevils players celebrate the fall of a wicket AFP

Royal Challengers Bangalore (RCB) scored 157 in their allotted 20 overs against Delhi Daredevils (DD) in their IPL 2012 match in Bengaluru on Saturday.

Bangalore, put into bat, got off to a flyer with openers Andrew Mc Donald and Cheteshwar Pujara scoring 30 runs of the first three overs.

Just when the duo looked to take the game away from Delhi, Morne Morkel struck to send back Pujara (11) who perished playing a shot to many.

Few overs later, Doug Bracewell came off with a stunner of a catch to send back danger man McDonald (30).

Delhi dealt a major blow on the hosts when Bracewell had in-form Virat Kohli caught by Yogesh Nagar for a score of eight.

Wicket continued to tumble for Bangalore as Saurabh Tiwary followed Kohli in the space of three runs.

AB de Villiers and Mayank Agarwal got down to stabilising the Bangalore innings, but just when the duo looked settled Shahbaz Nadeem struck to send back latter, to have the hosts reeling at 85 for five.

Skipper Daniel Vettori and De Villiers took the battle to Delhi but the former was run-out while attempting a nonexistent run.

De Villiers continued hitting the Delhi bowlers all over the park as he notched up his first half-century of this season.

Irfan Pathan was the most expensive bowler conceding 47 in his allotted four overs.