Scotland and Nepal both play their first match in the Championship.

(Hello and welcome to CricketCountry’s live blog of the 7th match of the ongoing ICC World Cricket League Championship between Scotland and Nepal at the Cambusdoon New Ground in Ayr, Scotland. The two sides will be playing their first match in the league so far, which has seen Netherlands won both their matches to rise to the top of the group. The hosts will be captained by Preston Mommsen, with the likes of Richie Berrington, Kyle Coetzer, wicketkeeper batsman Matthew Cross expected to play key roles. Scotland however, are without Josh Davey for the match, and Alisdair Evans will have the responsibility of leading the bowling attack. Catch the live scores and updates of this match live here.)

Mandal tries to clear mid-wicket fence off Safyaan Sharif but holes out to Richie Berrington for 97! 17 from 5. They have crossed over, and Pradeep Airee takes a single. 16 from 4. Sompal Kami hits a six! 10 from 3. They run another single. 9 from 2. Airee can get another single off the fifth ball, that won’t do it. 8 from 1. Kami hits a boundary off the last ball, but too late in the day. OUT! Anil Mandal 97(90)!

Live cricket score Nepal 165/2 | Need 71 from 30 balls. BATTING: Anil Mandal 77 (80), Paras Khadka 47 (43): Paras Khadka drives magnificently, four more. Anil Mandal comes to the party, smashing Michael Leask for two fours in three balls. They need 91 from 48 balls now. Safyaan Sharif bowls a tight over. He does not concede a boundary, something Nepal need desperately at this stage. De Lange drops Khadka, but it will not matter. 83 needed from 42. Gavin Main concedes a mere 6, including an extra run off an overthrow. 77 from 36. Evans responds with another excellent over, the match is slipping away from Nepal now.

Live cricket score Nepal 125/2 | Need 111 from 60 balls. BATTING: Anil Mandal 63 (65), Paras Khadka 22 (28): Finally Nepal take some initiative. Michael Leask bowls one short, and Paras Khadka immediately pounces on it, pulling him over the mid-wicket fence! Con de Lange also drops short, and Anil Mandal pulls him hard, that four brings up his fifty, the chase is on! Alasdair Evans bounces, Khadka hooks but top-edges, they need more of these. Mandal steps out against Evans and lofts him over his head for six!

Live cricket score Nepal 15/0 | Target 236 | Overs 5 [36]. BATTING: Mahesh Chhetri 11 (20), Anil Mandal 4 (10): Some probing bowling from Alasdair Evans and Safyaan Sharif, but Mahesh Chhetri and Anil Mandal have been up to the task. A quiet five overs for Nepal. Though they have not got off to a flier, they have managed to keep the wickets intact.

Live cricket score Scotland  128/5 | Overs 25 [36]. BATTING:  Preston Mommsen 32 (36), Con de Lange 10 (15): A contest going on. Nepal get the important wicket of Kyle Coetzer, followed by Rickie Berrington, who was unfortunately run out. Prestom Mommsen is however looking in good nick and will look to make a big score. OUT! Kyle Coetzer c Chhetri v Regmi 41 (60), Richie Berrington run out 3 (10)

Live cricket score Scotland 53/1 | Overs 9 [36]. BATTING: Kyle Coetzer 27 (30), Matthew Cross 6 (8): Finally a breakthrough for Nepal. Karan KC comes into the attack and dismisses Munsey, who was looking getting his eye in. His dismissal will provide some sort of respite for Nepal. Matthew Cross is the new batsman for the home side. OUT! George Munsey c Malla b Karan KC 19 (16)

Live cricket score Scotland 44/0 | Overs 7 [36]. BATTING: George Munsey 19 (15), Kyle Coetzer 24 (27): Scotland have made a brisk start as they have managed to score at over a run-a-ball. Nepal will hope to strike now and restrict their run-flow. Nepal managed to play well in the World T20 and now look to carry their momentum on into this match as well.

The match has started and it has been reduced to a 36-over per side. Earlier, Nepal had won the toss and elected to field first.

According to the latest report, the pitch inspection is due in 45 minutes, which only means more delay for us.

The proceedings of the match have been delayed due to rain, although the conditions have turned sunny now, which is good news for the players.

Meanwhile, Nepal will be led by Paras Khadka, arguably Nepal’s greatest cricketer ever. The charismatic all-rounder will have the responsibility of taking his team out of the gloom of having failed in their task of qualifying for the ICC World Twenty20 2016, the qualifiers of which were held recently in Scotland and Ireland. 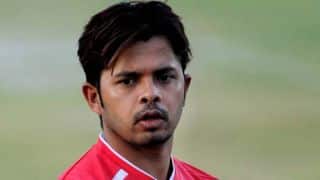