By Rishad DSouza and Ayush Gupta

Ola! Welcome to CricketCountry’s live coverage of the first Twenty20 International (T20I) between South Africa at Durban. We are Rishad D’souza and Ayush Gupta and we will be bringing you all the live updates of the match. It is the first T20I of their three-match T20I series, which is being played as a practice for the upcoming bigger event, ICC World T20 2016. The World Cup is set to be played in India so the result of the series in South Africa will make less impact keeping in mind the conditions in the sub-continent will be entirely different when compared to South Africa. The last time Australia and South Africa played in the shortest format of the sport, Australia won the three-match T20I series 2-1 at home. South Africa meanwhile will look to take revenge of that loss, especially when they have had better T20 results than this side of Australia.  LIVE CRICKET SCORECARD: South Africa vs Australia, 1st T20I at Durban

LIVE CRICKET SCORE & UPDATES, SA 158/7 in 19.2 overs: David Miller 53 (51), Chris Morris 6 (14): SA WIN!!!! That’s it, Miller’s unbeaten half-century guides Proteas to a comfortable and thrilling three-wicket win over the Aussies, as they go 1-0 up in the htree-match series. Can the Australians bounce back in the next tie at Johannesberg? OUT! Chris Morris c  Aaron Finch b Nathan Coulter-Nile 8 (19)

LIVE CRICKET SCORE & UPDATES, SA 73/5 in 10 overs: David Miller 0(2), David Wiese 1(1): It’s spiralling downward for South Africa! Rilee Rossouw cut a full toss from Mitchell Marsh straight to point and Faf du Plessis was run out next ball. Australians have been very disciplined with their bowling and are reaping the rewards on a propitious surface for bowling. OUT! Rilee Rossouw 19(14) c Khawaja b Marsh, OUT! Faf du Plessis 40(26) run out Peter Nevill

LIVE CRICKET SCORE & UPDATES, SA 56/3 in 8 overs: Faf du Plessis 33(22), Rilee Rossouw 11(8): South Africa are struggling at the moment. However, Faf is leading by example. Has played a very sublime innings so far. But he will require to partner him nicely at the other end. Rilee Rossouw is looking good though.

LIVE CRICKET SCORE & UPDATES, SA 19/2 in 3 overs: Faf du Plessis 12(9), JP Duminy 0(0): South Africa have gotten off to far from what could be called a desirable start! They have lost AB de Villiers on the very first ball in the innings, and Quinton de Kock fell for 7 in the third over! Things looking grim for SA. Coulter-Nile is looking lethal on this surface, he has removed both batsmen. OUT! AB de Villiers 0(1) c Nevill b Coulter-Nile, OUT! Quinton de Kock 7(8) c & b Coulter-Nile

LIVE CRICKET SCORE & UPDATES, AUS 157/9 in 20 overs: Adam Zampa 5(5), Andrew Tye 0(2): After the kind off blazing start they had in the powerplay, Australia will be a little disappointed with what they have put on board. They would have wanted to touch about 180 at least, but in the larger picture, this is actually a tough surface. It should be farely challenging for South Africa.

LIVE CRICKET SCORE & UPDATES, AUS 147/7 in 18 overs: Mitchell Marsh 32(21), Nathan Coulter-Nile 8(6): This is a very good innings by Mitchell Marsh. Things were going downwards for the Aussies and 150 looked a little out of reach, but he kept his cool and has taken Australia to a decent score. He’ll look to propel them to about 165 by end of the innings.

LIVE CRICKET SCORE & UPDATES, AUS 98/5 in 12 overs: Mitchell Marsh 3(4), Peter Nevill 0(1): Things are going downhill for Australia after a very good start. They are losing wickets in a cluster. Wiese removed Steven Smith while Morris got Maxwell out the next over.

LIVE CRICKET SCORE & UPDATES, AUS 72/3 in 8 overs: Steven Smith 1(7), Glenn Maxwell 1(2): Finch has thrown away such a fantastic start in the most regrettable way. He got a juicy full toss and he backed himself to smash it over cow corner! But he did not get the elevation and was caught by the man there, much to Imran Tahir’s delight. OUT! Aaron Finch 40(18) c Rabada b Tahir

LIVE CRICKET SCORE & UPDATES, AUS 71/2 in 7 overs: Aaron Finch 40(17), Steven Smith 1(4): This match already has a very electric atmosphere about it. Australia were on top but Wiese removed Warner for a 11-ball 20. So although Australia have a very good run rate, they have to be wary of losing wickets now. OUT! David Warner 20(11) c Duminy b Wiese

LIVE CRICKET SCORE & UPDATES, AUS 54/1 in 5 overs: Aaron Finch 39(16), David Warner 5(4): Australia have snatched the advantage from South Africa, thanks to Finch’s brutal assault on JP Duminy in the fifth over. In the third over, Khawaja fell to Rabada for a 10-ball 9. Finch is striking the ball very well though.

LIVE CRICKET SCORE & UPDATES, AUS 14/0 in 2 overs: Usman Khawaja 8(8), Aaron Finch 5(4): The first two overs are indicative that there is decent support for batsmen as well as bowlers. Khawaja and Finch have both looked quite comfortable in the stroke-making, but Kagiso Rabada is working some good pace.

TOSS: Australia have won the toss and elected to bat first

However, the batting line-up of Australia that features the likes of David Warner, Aaron Finch, Steven Smith, Usman Khawaja and James Faulkner will any day dominate even the best of the bowling attacks. South Africa have a sigh of relief with the return of their ace pacer, Dale Steyn. While South Africa will be led by their regular T20I skipper, Faf du Plessis, Australia will be led by Steven Smith who was handed the captaincy of all formats recently after Cricket Australia sacked Finch prior to the ICC World T20 2016. It is the only trophy absent in Australia’s cabinet and Smith has a huge task on him. 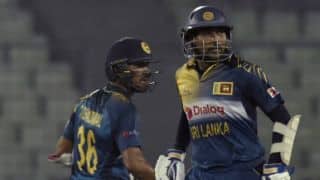