New Zealand have managed to take early wickets after scoring 331 in their innings.

(Can New Zealand grab another convincing victory to head into the mega event with full confidence, or shall South Africa deliver a killer blow as a pre-Valentine’s Day gift?)

South Africa 197 | Overs 44.2 — New Zealand are within striking distance of a victory, as they have managed dismiss Imran Tahir and Vernon Philander within a couple of overs of each other’s dismissals. Mitchell McClenaghan proves useful with the ball as he removes both batsmen. Philander departs after scoring an impressive half-century. And Trent Boult completes the formalities by dismissing Morne Morkel for a two-ball duck, collecting his fifth wicket of the innings. New Zealand have dominated the proceedings of the day, with the 121-run seventh wicket stand between Duminy and Philander being the only saving grace for the Proteas. Lot of positives for the Kiwis as they face Sri Lanka in the tournament opener at the same venue on February 14. Both teams are done with their warm-ups.  OUT! Imran Tahir b Mitchell McClenaghan 3 (7), Vernon Philander c Grant Elliott b Mitchell McClenaghan 57 (84), Morne Morkel c Brendon McCullum b Trent Boult 0 (2)

South Africa 183/7 | Overs 40.3 — The Black Caps have finally managed to bring the impressive 121-run seventh-wicket partnership between Duminy and Philander to an end, with Duminy getting castled off the bowling of Boult, who takes his fourth wicket of the innings. Philander is three runs away from a half-century on the other end, and will look to achieve the milestone. South Africa need another 149 to win from 57 balls, with three wickets remaining. OUT! JP Duminy b Boult 80 (98)

South Africa 154/6 | Overs 36 — JP Duminy has brought up his half-century, batting on a score of 57 off 85 deliveries. He has been well-supported by Vernon Philander on the other end, who is batting on 41 off 68 deliveries. The partnership is nearing the 100-run mark, as the pair have settled themselves firmly at the crease, and will look to bat with a little more freedom.

South Africa 123/6 | Overs 30 — JP Duminy and Vernon Philander are putting up a respectable fight for the South Africans so far, adding 61 runs for the sixth wicket off 98 deliveries, batting on scores of 39 and 28 respectively. While it would be too early, and kind of absurd to suggest the pair taking the Proteas past the 300-run mark, they can cross 200 if they manage to settle themselves further into the game.

South Africa 106/6 | Overs 25 — The South Africa innings has reached the halfway mark. While a win seems well out of contention for the Proteas at this juncture, pair of JP Duminy and Vernon Philander have managed to stitch a 44-run stand, and look to guide South Africa to a respectable score. Kyle Mills will be brought into the attack soon, as McCullum will look to bring Trent Boult back into the attack soon.

South Africa 62/6 | Overs 14 — It’s six down for South Africa. This is not at all what the Proteas wanted. Skipper, de Villiers and Parnell too depart for 24 and four, respectively after being dismissed by Daniel Vettori. So, finally Vettori is producing some magic again as he has done for all these years for New Zealand. OUT! AB de Villiers c Brendon McCullum b Daniel Vettori 24 (28), Wayne Parnell c Tom Latham b Daniel Vettori 4 (2)

South Africa 51/4 | Overs 12 — Dear oh dear, South Africa seem to be flattering like a pile of cards as they look to chase down a mammoth target of 332, set by New Zealand earlier. The men to be dismissed so far are Quinton de Kock, Rilee Rossouw, Faf du Plessis and David Miller for 11, two, eight and four, respectively. Currently, skipper, AB de Villiers and JP Duminy are batting on 22 and six, respectively. They need to bat sensibly from hereon as another wicket here could surely mean New Zealand taking this one.

New Zealand 252/6 | Overs 40 — New Zealand too reach to their 250 as the 40th over is completed. Clearly, they are in a really strong position hereon and would surely look to put up a big total, possibly, beyond 300 as it’s still 10 overs to go. However, with four wickets in the bag, it might be a little difficult, but as long as the pair of Luke Ronchi and Daniel Vettori are on the crease, it cannot be completely ruled out.

New Zealand 210/3 | Overs 32 — New Zealand seem to be on a roll here as they continue to bat brilliantly and have lost just a couple of wickets in the past 14 overs in the form of Brendon McCullum and Kane Williamson for 59 and 66 respectively. Ross Taylor and Grant Elliott come in and are batting on 36 and 17 respectively.

New Zealand 116/1 | Overs 18 — New Zealand have reached their 100-run mark for the loss of a wicket as skipper, McCullum also reaches his half-century which comes off 40 deliveries. Kane Williamson also continues t bat well as he is currently on 34 off 29 deliveries. South Africa would love to send Brendon McCullum back as soon as possiblr form here on as they well know, if he gets going, it’s almost curtains for the Proteas.

New Zealand 71/1 | Overs 12 — Thus, New Zealand have lost their first wicket of the game in the form of opener, Martin Guptill, who has been dismissed for 26 by Wayne Parnell after being caught behind by Quinton-de-Kock. Kane Williamson comes in as Brendon McCullum approaches his half-century as he is in the forties. OUT! Martin Guptill c de Kock b Parnell 26 (36)

New Zealand 30/0 | Overs 6 — Good start by the kiwis in the opening six overs as they have tried to play sensibly and beautifully rather than going for the big shots right from the start as they did against Zimbabwe in the last game and lost flurry of wickets in the initial stages of the game. Openers Brendon McCullum is batting well on 13, while Martin Guptill, who scored a century in the last warm-up tie is on 16.

Its 17degrees at Hagley Oval, where New Zealand have opted to bat v South Africa in their last warm-up #CWC15 #NZvSA pic.twitter.com/LO5zNxIPOu

Hello and welcome to CricketCountry’s coverage of the ICC Cricket World Cup 2015, 10th warm-up game between South Africa and New Zealand from the beautiful renovated Adelaide Oval at Adelaide. I am Ayush Gupta and I will bring you the live updates of the match.

After a thrilling and lucky five-wicket win over Sri Lanka, South Africa would like to maintain a clean sheet when they take on New Zealand in their final warm-up game at Christchurch on Wednesday. New Zealand, who had their first game washed out due to rain would look to gain a victory before officially kicking off the tournament form Sunday, February 14. ICC Cricket World Cup 2015: SCHEDULE & MATCH DETAILS

While most teams tend to have just one strong suit — either bowling or batting — New Zealand enjoy an equal advantage thanks to their fearsome pace attack of Kyle Mills, Trent Boult, Tim Southee, and Adam Milne. While Daniel Vettori is on his final legs as an international player, Nathan McCullum is steady at best, but certainly not threatening. One feels that if spin is to play a part in the World Cup, the Kiwis would rue a lack of options. ICC Cricket World Cup 2015: POINTS TABLE 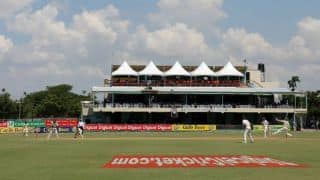 CPL semi-final, final to be held at Trinidad 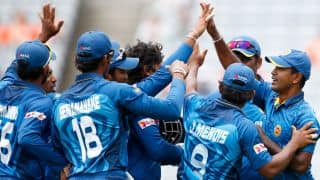