Eng take the batting powerplay with Root & Buttler in. Just 8 overs left, have they left it too late? #SLvENG pic.twitter.com/JoZlwQ2Bsd

England 171/5 | Overs 28
Joe Root 31(36), Jos Buttler 8(14)
No harm done after the three quick fall of wickets as Root and Buttler have a major task on their shoulders to guide England to a victory from here. They still need 65 off 42 balls.
England 152/5 | Overs 23.1
Joe Root 20(21)
GONE!! Alex Hales, Ravi Bopara and Eoin Morgan, all fall consecutively and quickly to put pressure back on England as Sri Lanka are quite back in the game with still 84 runs required to win.
OUT! Alex Hales 27(29) c Mendis b Mathews, Ravi Bopara 6(3) c Sangakkara b Herath, Eoin Morgan 1(4) c Perera b Mathews
England 130/2 | Overs 20
Alex Hales 19(22), Joe Root 13(16)
No harm done as Hales and Root take control of the English innings after the departure of highest scorer, Moeen Ali for an unfortunate run out. England still need 106 runs off 15 overs.

Sri Lanka 242/8 | Overs 35
Lahiru Thirimanne 62(47), Rangana Herath 2(3)
THAT’S IT!!!!!!! Dahmmika Prasad is dismissed off Boapara as the is stumped by Buttler. 21 off just eight, a good knock while Sri Lanka finish on 242 for the loss of eight and England would need 243 to win this contest and draw a game back in the seven-match series. 10-minutes of break and we are back for the chase.
OUT! Dhammika Prasad 21(8) st Buttler b Bopara
Sri Lanka 207/7 | Overs 32
Lahiru Thirimanne 52(40), Dhammika Prasad 0(0)
GONE!!! 200 comes up for Sri Lanka as Thirimane is into the grove of taking apart the English bowlers after reaching his half-century. He smashed three boundaries off Ben Stokes in the last over. However, Perera didn’t last long and was dismissed after going for a biggie off Chris Woakes thus mistiming the shot and getting caught off Moeen Ali.
OUT! Thisara Perera 8(10) c Ali b Woakes
Sri Lanka 175/6 | Overs 29
Lahiru Thirimanne 28(30), Thisara Perera 0(2)
GONE AGAIN!!!! Sixth one down for Sri lanka and it’s Jeevan Mendis who departs for just 12 off Joe Root who makes him caught off Steven Finn. Big hitting Thisara Perera comes in.
OUT! Jeevan Mendis 12(10) c Finn b Root.
Sri Lanka 152/5 | Overs 26
Lahiru Thirimanne 18(23), Jeevan Mendis 1(1)
GONE!!!!! It’s the big one. England get the big wicket of Kumar Sangakkara who was looking dangerous, especially after the half-century and was looking to smash it all over the park with the powerplay on. However, Chris Jordan did the trick after getting him caught off Moeen Ali. Jeevan Mendis comes in. 150 comes up as well for Lanka.
OUT! Kumar Sangakkara 53(58) c Ali b Jordan
Sri Lanka 140/4 | Overs 25
Kumar Sangakkara 53(58), Lahiru Thirimanne 17(22)
Sangakkara brings up his 89th ODI half-century as they take the batting powerplay as well in the 25th over. Sanga would now look to open up and go for the biggies as they innings draws nearer to close.

Congrats to @KumarSanga2 who just scored yet another half-century! What a machine! This is his 89th ODI fifty #SLvENG pic.twitter.com/P9aTMIA6Wr

Joy for Jordan has Mathews swipes hard but only succeeds in snicking behind. SL now 118-4 off 20.1 overs. #SLvENG pic.twitter.com/4pf1DJz1J2

Sri Lanka 31/3 | Overs 6
Kumar Sangakkara 8(10), Angelo Mathews 0(1)
GONE AGAIN!!! Thilina Kandamby, making a comeback after a long time doesn’t last long and has to depart just after facing two deliveries as he delivers an easy catch to the slip off a short-of-length bowl from Chris Woakes. Skipper, Mathews comes in.
OUT! Thilina Kandamby 0(2) c Jordan b Woakes
Sri Lanka 30/2 | Overs 5
Kumar Sangakkara 7(6), Thilina Kandamby 0(1)
GONE!!!!! It was a good start to the post-rain session as Sri Lanka were on a roll here with Dilshan smashing it all over the park with a number of boundaries while Sangakkara continues to bat sensibly occasionally hitting the ball. However, Dilshan couldn’t last long as Dilshan edges it to Buttler going for a cut off Finn.
OUT! Tillakaratne Dilshan 23(19) c Buttler b Finn

#SLvENG: Play to restart at 12.45pm. Match now 35 overs per side. pic.twitter.com/hiwtmEwAKT

There are a few wet patches in outfield….Umpires to inspect at 5 and if we start at 6 we could have a 35 over game pic.twitter.com/yZyQ5BTuJs

Its now pouring at the Mahinda Rajapaksa Stadium…. #SLvENG pic.twitter.com/hzVTihHJZN

Here come the covers with SL 6-1 off 2 after the loss of K Perera for a duck. Looking stormy… #SLvENG pic.twitter.com/bdcgjZ9AgY

Sri Lanka 6/1 | Overs 2
Tillakaratne Dilshan 3(4), Kumar Sangakkara 0(1)
GONE!!!! Not the start that Sri Lanka wanted. Kusal Perera departs early in the second over as he hands a straight catch to Eoin Morgan off Chris Woakes who balls a shorter one and Kusal messes it up while going for a cut. It’s rain interruption as well as the players walk off the field.
OUT! Kusal Perera 0(4) c Morgan b Woakes

Sri Lanka’s openers are on their way out. Watch live on SS2 or follow the action via our blog: http://t.co/s2tIgagZkd pic.twitter.com/QYPWMiJIZO

England will come into the third One-Day International (ODI) against Sri Lanka at the Mahindra Rajapakse International Stadium, Hambantota, 0-2 down in the series. England have had a tough run in ODIs for some time and pressure is mounting on them to put in an inspiring performance in this series. So far, only Moeen Ali, who scored a ton in the first game, and Ravi Bopara, who has made fifties in both, have managed to impress on this tour. The others need to lift their game if they are to challenge Sri Lanka in any way.

On the other hand, Sri Lanka welcomed the two victories following a tough tour to India. They have got their attack right and have also unleashed their batting on the opponents. However, for this game, they will be without Mahela Jayawardene, who is away due to personal reasons. Nevertheless, Sri Lanka begin the game as favourites and England would have to play really well if they are to compete with Sri Lanka. I am Ayush Gupta and will take you through this game. Click here to read our preview to the game. 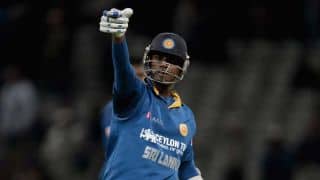