Catch all the action from the fourth day of the first Test between Sri Lanka and West Indies here.

Hello and welcome to CricketCountry’s live coverage of the second day of the first Test between Sri Lanka and West Indies at the Galle International Stadium in Galle on Saturday. This is Chinmay Jawalekar, and I shall be presenting the you the updates from the day’s play. After resuming the Day Three on 66 for 2, West Indies were bowled out for 251 and Sri Lanka skipper had no hesitation in enforcing the follow on. West Indies were set a task of first getting the 233 runs they trail by and then taking a healthy lead from there on. But things have not gone their way as Rangana Herath and Milinda Siriwardana have piecked up the wickets of the openers cheaply. West Indies are currently at 67 for 2, still trailing Sri Lanka by 166 runs. LIVE CRICKET SCORECARD: Sri Lanka vs West Indies 2015, 1st Test at Galle, Day 4

Live Cricket Score West Indies 227 | Overs 68.3 | Batting: Shannon Gabriel 7(13): And Sri Lanka have the privilege of an innings victory despite a brave 92 by Jermaine Blackwood who threatened to make the Lankans bat again. Knowing that Blackwood wouldn’t take singles to give Shannon Gabriel strike, Mathews had all nine fielders at the boundary. Blackwood went to smash a six but mistimed it and was caught at deep extra cover. OUT! Jermaine Blackwood 92(134) c Silva b Prasad

Live Cricket Score West Indies 198/9 | Overs 64 | Batting: Jermaine Blackwood 70(117): West Indies have plummeted to nine wickets down with Herath getting one wicket of Kemar Roach while Jerome Taylor was dismissed by Prasad for five runs. It’s just the matter of few minutes now before Sri Lanka get a convincing  victory. Jermaine Blackwood is looking to get a futile hundred.

Live Cricket Score West Indies 172/7 | Overs 56 | Batting: Jermaine Blackwood 55(107): Another pathetic loss of wicket by West Indies and this time it’s Holder who is the culprit. Holder tried to come down the track to try and flick Herath through midwicket but he missed and the ball ricocheted of his pads to Angelo Mathews at first slip. Mathews grasped the ball and accurately threw it at the stumps to run out Holder. OUT! Holder 18(26) run out Mathews

Live Cricket Score West Indies 156/6 | Overs 55 | Batting: Jermaine Blackwood 49(90), Jason Holder 8(13): West Indies will sit down for yet another highly unsatisfying lunch after losing four wickets in that session, most of which came due to rather poor shot selection. Sri Lanka on the other hand will be keen to win this without having to hold the bat again. They have a margin of 77 runs to take four wickets. Rangana Herath was once again the most severe tormentor for the West Indians.

Live Cricket Score West Indies 139/6 | Overs 48 | Batting: Jermaine Blackwood 40(59), Jason Holder 2(2): West Indies often lose middle order wickets when playing counter-attacking innings and such has been the case even this time. Denesh Ramdin tried to drive the ball but got the edge which flew to Kaushal Silva at second slip. The bowler Siriwardana will be pleased with the wicket since he was getting hit around by Blackwood and Ramdin. Jason Holder is the new man at the crease. OUT! Denesh Ramdin 11 (31) c Silva b Siriwardana

Live Cricket Score West Indies 88/5 | Overs 35 | Batting: Jermaine Blackwood 6(12): West Indies keep getting worse. This time arguably their best batsman Darren Bravo has played an utterly poor shot off a Nuwan Pradeep short ball getting the edge to the wicketkeeper. The rising ball had excess bounce and was well outside off and one would have expected a batsman of Bravo’s credibility to simply leave that but he poked at it and got the nick. OUT! Darren Bravo 31(66) c Perera b Pradeep

Live Cricket Score West Indies 82/4 | Overs 33 | Batting: Darren Bravo 23(59), Jermaine Blackwood 4(4): Rangana Herath struck of back to back deliveries in the 32nd over to get rid of nightwatchman Devendra Bishoo and then had Marlon Samuels in the most ungainly of dismissals. It was a fullish length just outside line of offstump and angling into the pads, but Samuels opted to leave it watch it crash into his pads plumb in front of the stumps. Umpire had no worry there. OUT! Devendra Bishoo 10(25) c Mathews b Herath, OUT! Marlon Samuels 0(1) lbw Herath

In the first innings, only Darren Bravo made a half-century for the West Indies and none of the batsmen stepped up to the plate to score big runs. Even Devendra Bishoo’s contribution of 23 not out was not enough to avoid the follow on. The task of wiping off the deficit now will fall on the West Indies middle-order, which failed miserably in the first innings. Bravo and Bishoo are the two unbeaten batsmen. With the likes of Marlon Samuels, Denesh Ramdin, Jermaine Blackwood and skipper Jason Holder to follow, West Indies will believe that they can still go on to save the match. READ: Sri Lanka eye win after enforcing follow-on against West Indies on Day 3 of the first Test at Galle 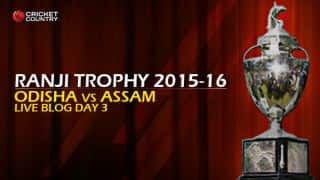 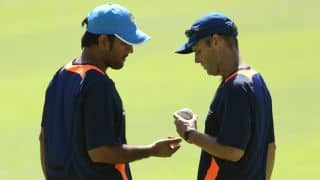