Catch the live scores and updates of Tamil Nadu vs Baroda, Ranji Trophy 2015-16, Group B match, Day 2 at Chennai.

Hello and welcome to CricketCountry’s live coverage of Day Two of the Ranji Trophy 2015-16 Group B match between Tamil Nadu and Baroda. Both sides are powerful and contain some experienced players. Abhinav Mukund, playing his 100th First-Class match, will want to get over a poor first day that saw Tamil Nadu bowled out for a mere 125. Though they managed to get the wicket of Hitesh Solanki, Baroda are still firm favourites at the end of Day One. Yusuf Pathan and Bhargav Bhatt shared eight wickets between them to rout the hosts for a meagre total. The Chennai pitch was quite clearly favourable to spin on the opening day, and Tamil Nadu will be ruing that their best bowler R Ashwin is away on national duty. Read all Ranji Trophy 2015-16 team previews here

Only Baba Aparajith could get a reasonable score as he made 44 off 90 balls with four fours and two sixes. K Bharath Shankar (28), Ramaswamy Prasanna (21), and Baba Indrajith (14) were the only others to get to double figures as Tamil Nadu’s main batsmen Abhinav Mukund and Dinesh Karthik scored just one run between them. Kedar Devdhar was unbeaten on 17 and skipper Aditya Waghmode was on 4 at stumps, with Baroda 33 for 1. READ: Ranji Trophy 2015-16: Tamil Nadu squad and team preview

Live cricket score Tamil Nadu 155/3 | Overs 59.4 | BATTING: D T Chandrasekar 0(4): Bhargav Bhatt bagged a total of 10 wickets in the game, it was his first 10-wicket haul of a First-Class match. Baroda bowled out the Ranji champions, Karnataka for 155 runs, with Baroda needing 122 runs to win with two days remaining in the game. Baba Aparajith and Baba  Indrajith were the only good performers for Karnataka in the second innings, scoring 39 and 35 respectively. Meanwhile, Bhatt claimed 6 wickets, with Swapnil K Singh taking two and Yusuf Pathan one wicket.

Live cricket score Tamil Nadu 127/6 | Overs 49 | BATTING: Kousik J 7(26) : A third wicket for Bhargav Bhatt, removes set batsman Baba Indrajeet for a 63-ball 35 in the last delivery of the 48th over. From here Tamil Nadu leads Baroda by 82 runs with Malolan Rangarajan joining Kousik J at the crease. Kousik almost got himself run-out in the very next delivery. OUT! Baba Indrajeet c Yusuf Pathan b Bhargav Bhatt 35(63)

Live cricket score Tamil Nadu 56/3 | Overs 24 | BATTING: Ramaswamy Prasanna 2(16):  Bhargav Bhatt bags his second wicket for the innings and a fifth wicket of the game, as he removed set batsman Baba Aparajith in the 24th over after dismissing  opener Bharath Shankar for 15 from 52 deliveries in the 18th over. Ramaswamy Prasanna and Dinesh Karthik are the new batsmen in, for Tamil Nadu, who lead by 22 runs. OUT! Baba Aparajith c Pinal Shah b Bhargav Bhatt, OUT! Bharath Shankar c Aditya Waghmode b Bhargav Bhatt 15(52)

Live cricket score Tamil Nadu 3/1 | Overs 2 | BATTING: K Bharath Shankar 2(2):  Swapnil K Singh struck in the second delivery of the first over of their second innings. Abhinav Mukund went for a duck again after he failed to score a single run in the first innings. After the first over, Tamil Nadu Baroda by 31 runs with Baba Aparajith joining the opener on crease. OUT! c Deepak Jagbir Hooda b Swapnil K Singh 0(2)

Live cricket score Baroda 159/4 | Overs 49.2 | BATTING: S S Mangalorkar 1(13): Malolan Rangarajan finsihes the job for Tamil Nadu, bags the last wicket of Bhargav Bhatt in the 50th over thereby bowling out Baroda in the first session of day two of the ongoing Ranji trophy 2015-16. The visitors managed a lead of 34 with Yusuf Pathan top scoring for them with his 43-ball 41. Meanwhile, for Tamil Nadu, off-spinners Chandrasekar and Rahil Shah struck with the ball, claiming four wickets each. OUT! Bhargav Bhatt Dinesh Karthik b Malolan Rangarajan 16(10)

Live cricket score Baroda 153/9 | Overs 47.4 | Batting: S S Mangalorkar 1(8): A fourth wicket for Chandrasekar as he dismissed the new batsman  Murtuja Vahora for a 12-ball duck. The very next ball was caught by the fielder on the boundary but he had crossed the rope thereby turning Chandrasekar’s to be five-wicket haul into a six for Baroda. From here the visitors lead by 28 runs. S S Mangalorkar and Bhargav Bhatt are on crease, the last partership for Baroda in the innings. Let’s see if they are succesful in frustrating Tamil Nadu or not! OUT! Murtuja Vahora c Baba Aparajith DT Chandrasekar 0(12)

Live cricket score Baroda 92/4 | Overs 27 | BATTING: P R Shah 7(9):  Big blow for Baroda, their only hope departs, Rahil Shah gets his thrid wicket as he dismissed Pathan for a 43-ball 41 in the 42nd over. Umpire thought for a while but eventually lifted his finger and a dispointed Pathan walked off teh field. From here, Baraoda lead Tamil Nadu by 9 runs. Murtuja Vahora is the new man in. OUT! Yusuf Pathan LBW Rahil Shah 41(43)

Live cricket score Baroda 136/7 | Overs 43 | BATTING: Yusuf Pathan 24(17): Baroda in miserable position, six wickets down as Swapnil K Singh gets run out, leaving Yusuf Pathan still fighting on the other end. It wouldn’t be wrong to assume that the visitors need their big man to bat till the end of the day, he has to ensure a big lead in order to even try for a victory in the opener game of Ranji Trophy 2015-16. His 36-ball constitutes of two sices and two fours, this shows his capability of taking off pressure from his side by going for the big shots even while under pressure. OUT! Swapnil K Singh run out  L Vignesh 3(21)

Live cricket score Baroda 106/5 | Overs 33 | BATTING: Yusuf Pathan 24(17): Baroda have lost their fifth wicket. They have lost a wicket every two overs since the dismissal of Aditya Waghmode in the 25th over. Swapnil K Singh has joined Pathan, it will be intersting to watch how the younster handles the situation under pressure. OUT! Deepak Jagbir Hooda c K Bharath Shankar b Rahil Shah 3(6)

Live cricket score Baroda 92/4 | Overs 27 | BATTING: A third wicket for the debutant Chandrasekar, he is being the game-chnager for Tamil Nadu single-handedly here. Hardik Pandya becomes his new victim who departs for a 12-ball 2. Deepak Jagbir Hooda joins Pathan out in the middle, it is important for the dup to build a partnership here in order to take Baroda out of trouble. The visitors still trail tamil Nadu by 31 runs on day two of the Ranji Trophy 2015-16. OUT! Hardik Pandya LBW DT Chandrasekar 2(12)

Live cricket score Baroda 75/3 | Overs 27 | BATTING: H H Pandya 2(7) : A second wicket for Chandrasekar in his second over, set batsman Kedar Devdhar departs for a 73-ball 40. This might be the game-changing momet for the hosts, what an exclelent start for teh debutant. Yusuf Pathan is the new batsman in for Baroda, great opportunuty for him to turn his ordinary Ranji Trophy record into good one when his side is in trouble. OUT! Kedar Devdhar 40 (73) b DT Chandrasekar

Live cricket score Baroda 42/1 | Overs 18 | BATTING: Kedar Devdhar 17(45) Aditya Waghmode 4(28): After bowling out Tamil Nadu for a mere 125, Baroda lost opener Hitesh Solanki towards the end of day one. Rahil Shah was the wicket-taker, who removed Solanki in the seventh over for five runs from 23 deliveries. As of now, the away side trails Abhinav Mukund’s isde by 83 runs, with nine wickets in hand. 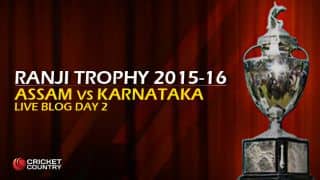