Hello and welcome to CricketCountry’s live cricket blog of the fifth contest of the Caribbean Premier League (CPL) 2016 between Trinbago Knight Riders (TKR) and Guyana Amazon Warriors (GAW) at Port of Spain. While TKR have lost both the contests, GAW came up victorious in the only game they have played so far. TKR, the defending champions and led by Dwayne Bravo, have bowled ordinarily so far, and failed to provide impetus in crunch situation. Their batting, however, has been impressive. But, they have been heavily relying on Darren Bravo and Hashim Amla to put the opposition on the back foot. Read: Hashim Amla, Dwayne Bravo broke 9-year-old record in CPL 2016

Live Cricket Score | Guyana Amazon Warriors 166/4, 19.2 overs | Jason Mohammed 33(30) , Anthony Bramble 3(2) | SIX! Mohammed thrashes Beaton for a maximum which earns his side a win. The first ball is a dot. 3 from 5 is the equation. Three runs needed of the final over, which will be bowled by Beaton.

Bramble comes to the middle, with seven more runs needed. OUT! Bravo gets another as the new batsman goes for a golden duck. Barnwell comes to the crease. OUT! Lynn did his job, but could not stay till the end as he is caught lbw of Bravo’s bowling. Just four runs of his over, but it won’t matter to Guyana, who need a mere 9 more runs.  Narine to bowl the 18th over. 13 runs needed of the last 3 overs.  Bravo to bowl the 17th over.

Live Cricket Score | Guyana Amazon Warriors 143/2, 16 overs | Jason Mohammed 18(19) , Chris Lynn 73(37) | SIX! Lynn seems to be in a hurry to finish of the game.  The first one is dispatched towards the square leg, whereas the second one is over the long on. Back to back sixes from Lynn of Cooper’s first two deliveries of the 16th over. End of 15 overs, and Guyana have the game in their hands. They need 41 of the last 5 overs. Mohammed gets into the mood, as he gets a boundary towards point region. The Australian is striking at nearly 170. Another maximum for Lynn through deep midwicket, as he reaches his half-century of just 30 balls.

SIX! Lynn does the improbable, as he takes on Narine and dispatches the ball out of the ground through deep midwicket. Narine’s back into the attack for his third over. Meanwhile, Cooper does well to concede just 7 runs of the 13th over. Rain is in the air, as slight drizzle start to fall. 69 runs from eight overs seem very possible, especially looking at how well Lynn is batting.

Live Cricket Score | Guyana Amazon Warriors 94/2, 12 overs | Jason Mohammed 5(10) , Chris Lynn 37(22) | SIX! Lynn gets his third maximum for the day, and a much needed one this time around. Benn continues and bowls a good final over of his spell, conceding just four runs. At the end of 10 overs, Guyana are 81 for 2, needing 82 more runs to win. Jason Mohammed comes to the middle. OUT! The change works for Trinbago as Miller clean bowls Guptill. Miller comes back into the attack. It seems the chase will be a cakewalk for Guyana after seeing the way these two are batting. Benn continues, and Lynn gets his second six for the day, this time through deep square.

Live Cricket Score | Guyana Amazon Warriors 66/1, 8 overs | Martin Guptill 23(19) , Chris Lynn 16(11) | SIX! A confident shot from Lynn, which earns him a maximum through long on. Bravo brings himself into the attack.Another good over from him, as he concedes only four runs. Narine to continue. Guyana are 46 for 1 after 5 overs. 12 runs of the big West Indian’s first over. Suleiman Benn comes into the attack and boom, Guptill scores a six and a four of his first two deliveries.

Live Cricket Score | Guyana Amazon Warriors 34/1, 4 overs | Martin Guptill 7(5) , Chris Lynn 0(0) | OUT! Narine strikes. After four back to back dot balls, Smith is trapped lbw. Seeing the devastation caused by Smith, Sunil Narine is brought into the attack. End of three overs, and Guyana are well on top at 34 for 0. Just like the last match, Bravo makes a change first up, giving the ball to Cooper.

DROPPED! Miller fails to hold on to Smith’s shot of his own bowling. Back to back sixes from Smith, first above the bowler’s head and then through long off. Nikita Miller to bowl from the other end. Back to back boundaries for the West Indian, this time over point region. First runs of the day for Smith, who gets off with a boundary over mid on. We are back underway, Ronsford Beaton to bowl the first 0ver.

OUT! Bravo departs after going for a big heave, but is caught at long off. SIX! First ball of the 18th over from Emrit and Bravo dispatches it for a maximum. Munro is nearing his century, playing at 96. Another tidy over for the batting side, which gets them 8 runs. Decent 16th over for Trinbago, as they muster 8 runs without taking risks.

Live Cricket Score | Trinbago Knight Riders 114/3, 15 overs | Colin Munro 88 (55), Dwayne Bravo 3 (7) | Overs 13 to 15 have just costed 14 runs, with Bravo taking his time to settle. Next to come in is skipper Dwayne Bravo. OUT! Darren Bravo departs after a struggling knock. What a outstanding batting display from the New Zealander, as he 2 sixes and a four in the 12th over, which helps Trinbago’s run-rate to grow. Munro has done brilliantly to get his side out of jail.

Live Cricket Score | Trinbago Knight Riders 74/2, 10 overs | Colin Munro 57 (36), Darren Bravo 9 (13) | Excellent batting display by Colin Munro. Brings up his fifty. Despite losing, McCullum and Amla, he kept the scoreboard ticking and hit sixes at will. If he keeps firing on all cylinders, TKR might reach a colossal total.

Live Cricket Score | Trinbago Knight Riders 29/2, 5 overs | Colin Munro 21 (19) | What a start for the Warriors. Sohail Tanvir dismisses Brendon McCullum on a duck. His miserable form continue. TKR, like they did in the previous match, lose wickets in the batting powerplay. Amla, hero of the last match, failed to emulate his stellar performance, as he managed to score only 10. However, Colin Munro has looked in a good touch. He hit a couple of mighty sixes.

GAW, on the other hand, put up a commanding show in their previous match against St Kitts and Nevis Patriots, winning the contest by 4 wickets. Like TKR, they boast of quality T20 cricketers. They have the likes of Martin Guptill, Dwayne Smith, Adam Zampa, Sohail Tanvir, among others, while TKR have Brendon McCullum, Colin Munro, Sunil Narine, Ramnaresh Sarwan, Umar Akmal at their disposal. Read: Zampa thinks CPL will be great learning curve

TKR’s is middle-order has been become a spot of bother for their skipper Bravo. Former New Zealand skipper Brendon McCullum, one of the key players of TKR, has not been able to use the long handle to destructive effect. Thus, it’s imperative that he gets some runs under his belt and help his side register its maiden victory in this year’s edition. Like him, his countryman Munro has, so far, failed to find his feet as well. Narine, on the other hand, has been TKR’s significant performer.

While GAW will look to continue the winning momentum, TKR will be itching to open their account. 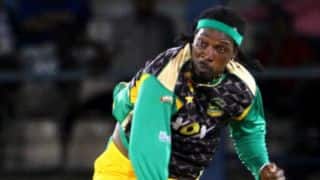 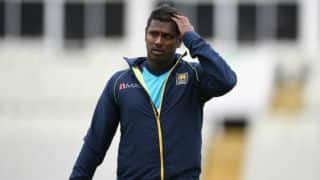 Angelo Mathews: Defeat against England was tough time for me as captain but can’t run away from it