Catch the live cricket scores and updates of Trinbago Knight Riders vs Barbados Tridents, CPL 2016 at Port of Spain.

Hello and welcome to CricketCountry’s live cricket blog of the third contest of the Caribbean Premier League (CPL) 2016 between Trinbago Knight Riders and Barbados Tridents at Port of Spain. In the tournament opener of this T20 league, Trinbago Knight Riders — the defending champions — lost to St Lucia Zouks at the same venue by 6 wickets, courtesy Johnson Charles’ stunning half-century and Shane Watson’s match-winning three-for. With the help of Darren Bravo’s unbeaten 63, the hosts posted 162 runs on the scoreboard on a belter of a track. In the pursuit of defending the respectable total, none of the bowlers stepped up, except Sunil Narine, whose figures read 4-0-25-2. Read – Sangakkara: WI has built fantastic brand in CPL

Live Cricket Score | Barbados Tridents 159/8, 20 overs | Wayne Parnell 16(9), Akeal Hosein 7(6) | Trinbago win the match by 11 runs. 27 runs needed of the last over, which will be bowled by Beaton. OUT! A brilliant cameo from Pooran comes to and end. The fourth ball of the over is again dispatched for a six towards the leg side boundary. The first delivery is dispatched for a maximum over deep mid-wicket. Pooran is making a game out of nothing, scoring two sixes and a four of the 18th over from Hooper.  OUT! Nurse also departs after trying to play a big shot of Narine.

Live Cricket Score | Barbados Tridents 114/6, 16 overs | Nicholas Pooran 14(6), Ashley Nurse 1(1) | SIX! A brilliant shot from Pooran over deep midwicket of Bravo’s bowl goes for a maximum. Ashley Nurse is the next to come in. OUT! Another one bites the dust for Barbados, as Weise is run out for 1. David Weise is the next man to come. OUT! It surely is the game, as Dwayne Bravo scalps the wicket of de Villiers. Barbados Tridents will be praying for a AB special today. Pooran is the next batsman in.

Live Cricket Score | Barbados Tridents 95/4, 14.2 overs | AB de Villiers 10(11) | OUT! First ball duck for Pollard. Pollard is the new man in, with Tridents needing an quickfire innings from him.

Live Cricket Score | Barbados Tridents 94/3, 14 overs | AB de Villiers 9(10) | OUT! Benn scalps the wicket of Malik, who departs for 28. Benn continues for his third over, with the task becoming bigger and bigger for Tridents.

Live Cricket Score | Barbados Tridents 86/2, 13 overs | Shoaib Malik 23(20), AB de Villiers 6(8) | Four! Much needed boundary for Malik as dispatches Narine’s ball towards backward point boundary. Required Rate has climbed up to 12 after just 3 runs came from the previous over. Benn comes back into the attack. Narine has bowled exceptionally well, with his two overs costing a mere 7 runs. ‘Mr 360’ de Villiers comes into bat, with his side needing a gem of a knock from him.

Live Cricket Score | Barbados Tridents 67/2, 10.3 overs | Shoaib Malik 10(11) | OUT! Barbados lose their second wicket as Taylor departs for 37. Narine comes on for his second over. Time for drinks as 10 overs have been completed, with Barbados Tridents in a spot of bother at 66 for 1. At one end, Taylor has also found it tough after a aggressive start. The other end, Malik has struggled to get going, scoring at less than rub a ball. A tough task ahead. Beaton continues on for his second over, as BIM need 108 in 11 overs.

Live Cricket Score | Barbados Tridents 63/1, 9 overs | Steven Taylor 36(33), Shoaib Malik 8(8) | Finally Taylor decides to up the ante, as he takes on Miller and scores a six over wide long-on. Both Taylor and Malik are finding it a tad tough to score runs at a pace. Required Run-Rate for Barbados has climbed over 9.5 now. Ronsford Beaton is the new bowler into the attack. The last four overs have been really good for Trinbago, as they have only conceded 17 runs. Another tidy over, with just 5 runs coming off it. Miller is back into the attack. Malik is the next batsman in.

Live Cricket Score | Barbados Tridents 42/1, 6 overs | Steven Taylor 26(23) | OUT! Cooper dismisses Hope for 11. Cooper replaces Narine for his second over. He also follows up Narine’s good over, conceding just 4 runs. Fifth bowling change in as many overs, as Dwayne Bravo comes to bowl his first ball. Brilliant over from Narine, as he only concedes 2 runs. Sunil Narine is called up into the attack, with Trinbago needing a wicket.

Live Cricket Score | Barbados Tridents 30/0, 3 overs | Steven Taylor 20(13) , Kyle Hope 6(5) | Another good over for the batting side, with 9 runs coming of it. Benn comes on as the first change in the attack. Eight runs of the second over. Good start for Barbados. Hope gets his first runs of the day with a boundary. Kevon Cooper to share the new ball. Good first over for Barbados Tridents, as they amass 12 runs, though with a bit of luck. Dropped! Colin Munro is unable to hold on to Taylor’s catch at long on, and the ball goes for a six. Nikita Miller will start the proceedings with the first over.

Live Cricket Score | Trinbago Knight Riders 170/5, 20 overs | Dwayne Bravo 66 (46): TKR score 76 runs in the last 5 overs. Excellent comeback. From 20 for 4 to 170 for 5, DJ Bravo and Hashim Amla displayed magnificent show of character. Overall, they put up 150 runs for the fifth wicket. These heroics are a proof of how experience can turn the turn in your favour. However, the pitch has very little to offer the bowlers. TKR will need to bowl out of their skin to outplay Barbados’ strong batting line-up.

Live Cricket Score | Trinbago Knight Riders 94/4, 15 overs | Dwayne Bravo 31 (30), Hashim Amla 46 (40): Oh, the veterans have led the resurgence in style. The run-rate is now over 6 runs. If they score 50 in the next 5 overs, captain Bravo would be more than happy. Hashim Amla, on the other hand, has played innings of substance. He is four runs away from a spectacular half-century.

Live Cricket Score | Trinbago Knight Riders 69/4, 12 overs | Dwayne Bravo 18 (22), Hashim Amla 34 (30): Good comeback by Trinbago Knight Riders. After being 20 for 4, they have managed to pull things together. Both experience campaigners, Dwayne Bravo and Hashim Amla, have somehow managed to take the team out of the woods. If they keep the scoreboard ticking, they might eventually give their bowlers something to defend.

Live Cricket Score | Trinbago Knight Riders 47/4, 9 overs | Dwayne Bravo 10 (12), Hashim Amla 22 (22): FOUR! Outside edge, no slip in place, Dwayne Bravo gets his first boundary, not the way he would have wanted. Nonetheless, these are handy runs. FOUR! Back of length, Hashim Amla elegantly cuts past backward point.

These two need to keep the scoreboard ticking and put Barbados Tridents under pressure.

Two wickets in an over for Ravi Rampaul. First the in-form Darren Bravo edges a back-of-length delivery to the keeper and then Umar Akmal went hard at the ball only knick it to the keeper. The crowd looks stunned. Terrible start for the hosts.

The onus is now on captain Dwayne Bravo and veteran Hashim Amla to steady the sinking ship.

Live Cricket Score | Trinbago Knight Riders 14/1, 3 overs | Colin Munro 6 (6), Hashim Amla 7 (6): In the very second over of the match Akeal Hosein draw first blood for the visitors. Tosses the ball up, invites McCullum to play a big shot and knocks over his leg stumo. Top-notch cricket by Barbados Tridents!

Excellent bowling. Only two boundaries so far, out of which one came off the inside edge. Knight Riders under pressure, it seems.

OUT! Brendon McCullum b Akeal Hosein 1 (6)

There will be a number of key battles that are sure keep the crowd on its feet; for example, de Villiers vs Bravo, Narine vs Pollard, Wiese vs Amla, Holder vs McCullum. In the first two matches, all the teams have crossed the competitive 160-run mark. Thus, it’s imperative that the team batting first puts a colossal total on the scoreboard.

All in all, it promises to be a cracker of a contest. 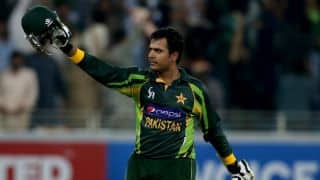 If ball is there to be hit and in my zone, I will go for it: Sharjeel Khan 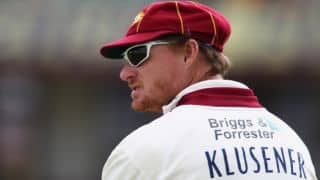