Catch live updates for Day Two of Tripura vs Services .

Hello and welcome to CricketCountry’s live coverage of Day Two of the Group C game of the 2015-16 edition of Ranji Trophy between Tripura and Services at Maharaja Bir Bikram College Stadium, Agartala. Tripura had a splendid start to the game with picking up early wickets as Services were looking to salvage a victory in the final group stage game of the season. Tripura on winning the toss elected to field and put the visitor into bat. Services going into stumps at Day 1 were placed 282 for five with Rajat Paliawal and Devendra Lochab on the crease. Complete coverage of Ranji Trophy 2015-16

Live Cricket Score: Tripura 33/1 | Overs 12 | BATTING: Arindam Das 10(28), Udiyan Bose 9(30): Rajat Paliwal’s double century before Services got bundled out for a massive first innings total of 512. The wickets were taken by Tripura’s Rana Datta, Manisankar Murasingh, Tushar Saha and A K Sarkar. In reply to that, Tripura lost their opening batsman Virag Awate on the first delivery of the 4th over. From here, Tripura trail the visitors by 479 runs. OUT! Virag Awate c Amit Pachhara b Raushan Raj 14(13)

Live Cricket Score: Services 430/7 | Overs 116 | BATTING: Khalid Ahmad 20(39), Raushan Raj 1(9): Although Tripura’s Rana Datta bagged four early wicket, that did not deny Services to post a huge total. Majority of their runs came from Rajat Paliwal’s bat who was dimsissed for 203 in 266 balls. The last batsman to get out was Devender Lohchab who missed a superb century just by five runs. OUT! Devender Lohchab c N N Sen Choudhury b M B Mura Singh 95(197)

LIVE CRICKET SCORE: Services 291/5 | Overs 78.4 | BATTING: Rajat Paliawal 148(180), Devender Lohchab 37(103) |  Rajat Paliawal and Devender Lohchab will look to start of Day 2 on good note as Services will want their batsman to make a big score and keep the bowlers chance for an victory. Rana Dutta will want to pick up another 5-wicket haul before this season ends for Services as he has already taken 4-wickets in this innings.

Services got off to a poor start as Rana Dutta struck four times to reduce them to 105 for five. Starting the innings for Services Aanshul Gupta and Soumik Chatterjee came out, with only 10 runs on the board Chatterjee(9) got out leg-before wicket to Dutta. And before Services could steady themselves Dutta stuck twice again picking up Gupta(12) and Amit Pachhara(8) in a span of two deliveries. It was only after Vikas Hathwala hit some good looking shots that Services could get past hundred run mark. Hathwala himself got out at 38 to Dutta delivery as Services were at 105 for four. Paliawal and Yashpal Singh steadied the ship as Services crossed 150. Paliawal (147 )scored a beautiful century and looked good to make a double on Day 2. Singh got out after supporting Paliawal at a personal score of 18 to Sarkar. Devendra Lochab played a good hand of 31 going to stumps on Day 1 with Services in a fairly good position at 282 for five. For, Tripura Rana Dutta continued his good form with four wickets in the match already giving away just 53 runs. 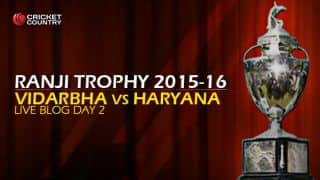