Hello and welcome to CricketCountry’s live blog of the fourth day of the ongoing Ranji Trophy 2015-16 Group C match between Tripura and Services in Agartala on Friday. At stumps yesterday i.e. on day three, Tripura were following-on and were nine for no loss. They were trailing by 274 runs. A lot is expected from this match today. It shall be interesting to witness whether Tripura will succeed to avert an innings defeat or not. Tripura’s openers— Virag Awate and Arindam Das were batting at stumps on yesterday. Arindam got a start in the first innings but could not convert it into a big score. He will try to change that in Tripura’s second innings. Tripura batsmen have to remain wary of Gurdev Pathania, who bowled pretty well in the second innings of the match. Services have played good brand of cricket in this match, both through their batting and later with the ball.  Complete coverage of Ranji Trophy 2015-16

Tripura got bowled out for 220 in their second innings and thereby handing Services a superb an innings and 54-run win.

Live Cricket Score: Tripura 123/3 | Overs 42 | BATSMEN: Udiyan Bose 38(107), Bhagyamani Murasingh 3(7) | From here, Tripura trail Services by 160 runs with 7 wickets to spare. The visitors will try to bowl out Tripura under 160 in order to win by an innings that will give them 7 points. The last batsman to get dismissed was Parvinder Singh who scored an excellent half-century. OUT! Parvinder Singh c Yashpal Singh b Diwesh Gurdev Pathania 58(96)

Live Cricket Score: Tripura 53/2 | Overs 17 | BATSMEN: UU Bose 15(34), Parvinder Singh 18(31) | Raushan Raj has taken both wickets to fall so far. Diwesh Pathania, Khalid Ahmad, and PS Poonia yet to pick up a wicket. Services still in complete control of the game. Neither team is likely to qualify from here though.

It shall be interesting to see the strategy adopted by Tripura’s batters today. Will they play defencively to try and squeeze out as many overs as possible to help them get close to a draw or will play their natural game with some scoring shots to avert an innings loss. Although, Tripura is already eliminated from going into the quarterfinals owing to their poor show in the tournament still they will be hoping to draw this match to at least take some positive from the game. Services, on the other hand are unfortunate since Himachal Pradesh won their match against Kerala. They could have qualified only if the match had ended in a draw so that both the teams had received only a point each. 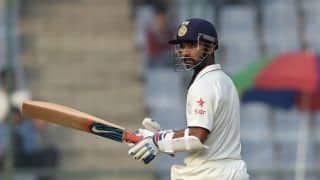 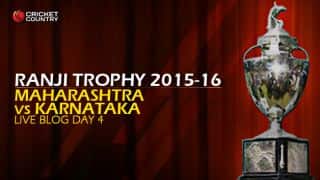