A win for UAE will guarantee them a spot in the group stages of the Asia Cup T20 2016.

Hello and Welcome to CricketCountry’s coverage of the Asia Cup T20 2016, match between Oman and United Arab Emirates (UAE) in Mirpur, Dhaka. This is the second match of the day as it will succeed the match between Afghanistan and Hong Kong at the same venue. Oman have had a mixed tournament so far, having won one and lost one. They lost their first match to Afghanistan, bit secured a nail-biting five-run win in the second match against Hong Kong, despite an excellent ton from Babar Hayat. UAE however managed to defeat Afghanistan in the opening match of the tournament and will be confident going into this match against Afghanistan. Live Cricket Scorecard: United Arab Emirates vs Oman, Asia Cup T20 2016 Qualifiers, Match 6 at Mirpur

Live Cricket Score, Oman 101/8 in 20 overs | Target 173 | BATTING: Sufyan Mehmood 13(32), Munis Ansari 2(5): Maqsood attempts a cut off a short ball bowled by Rohan Mustafa but is not able to get the ball in the middle of his bat. The ball takes the top edge of his bat down the throat of Muhammad Kaleem standing at the third man region. Two runs come in the penultimate over followed by just one in the final bowled by Ahmed Raza and Mustafa respectively. UAE win the match by a massive 72 runs. OUT! Zeeshan Maqsood  c Muhammad Kaleem b Rohan Mustafa 46(42)

Live Cricket Score, Oman 98/7 in 17.5 overs | Target 173 | BATTING: Zeeshan Maqsood 46(41), Sufyan Mehmood 12(25): Oman needs two more runs to get to the 100-run mark. Zeeshan Maqsood has played a good innings under pressure. He is just four short off his half century. Oman need 75 more runs off 13 balls, impossible. They had no answer to UAE bowlers although their bowling was decent by their standards. They may go for the kill in the final 13 deliveries and see till what score they reach or they may prefer playing in the same way they are at the moment.

Live Cricket Score, Oman 74/7 in 15 overs | Target 173 | BATTING: Zeeshan Maqsood 32(33), Sufyan Mehmood 2(16): Zeeshan Maqsood and Sufyan Mehmood are trying hard but the UAE bowlers are not giving them any respite. In the last five overs, Oman require 99 more runs to win which is simply next to impossible; also they are seven down. Things are looking very bleak for them. The batters have lost all hope and are attempting to at least play out the remaining overs. Sufyan in particular is finding it hard to score runs; even rotating the strike.

Live Cricket Score, Oman 62/7 in 11.3 overs | Target 173 | BATTING: Zeeshan Maqsood 25(27), Sufyan Mehmood 1(1): UAE bowlers are bowling exceedingly well but it’s less of their good bowling than poor batsmanship from Oman. Mehran Khan and Amir Ali are also back in the pavilion with scores of eight and two. Amir attempted a cut shot off Raza but ends up dragging the ball onto his stumps. Things are getting very bleak for Oman. Victory is far-fetched but can they salvage some pride by going past the 100-run mark. OUT! Mehran Khan c Qadeer Ahmed b Mohammad Shahzad 8(12), OUT! Amir Ali  b Ahmed Raza 2(7)

Live Cricket Score, Oman 48/5 in 8 overs | Target 173 | BATTING: Zeeshan Maqsood 21(19), Mehran Khan 2(7): Aamir Kaleem gets out after a run-a-ball 12. Sultan Ahmed was next in line. A good length ball by Amjad Javed did him in. Ahmed was late in his shot and the sudden bounce did the trick. He edges the ball to the wicketkeeper. Oman are now in tatters and may well get bowled out for under 80 or 90.  OUT! Aamir Kaleem c Ahmed Raza b Qadeer Ahmed 12(12), OUT! Sultan Ahmed c Swapnil Patil b Amjad Javed 0(1)

Live Cricket Score, Oman 29/3 in 3.4 overs | Target 173 | BATTING: Zeeshan Maqsood 10(8), Aamir Kaleem 6(5): Oman have lost three quick wickets early on in their innings. Medium-pacer Mohammad Naveed took two of them. Oman are chasing a big score and things have got very difficult for them now. They now need a partnership from Zeeshan Maqsood and Aamir Kaleem. They require 144 runs from here onwards from 98 balls and they have just seven wickets in hand. OUT! Jatinder Singh b Mohammad Naveed 1(5), OUT! Aaqib Sulehri c Rohan Mustafa b Qadeer Ahmed, OUT! Adnan Ilyas c Swapnil Patil b Mohammad Naveed 1(2)

Live Cricket Score, UAE 172/6 in 20 overs | BATTING: Mohammad Naveed 5(2), Saqlain Haider 0(0): UAE post 172 in their allotted 20 overs. Left-arm spinner Aamir Kaleem took a four-wicket-haul. UAE were able to accelerate in the death overs and hence are able to reach a good total. The impetus is now on their bowlers to defend the hefty total they have put on board. OUT! Muhammad Usman  c Jatinder Singh b Aamir Kaleem 46(22), OUT! Amjad Javed c Sufyan Mehmood b Aamir Kaleem 8(13)

Live Cricket Score, UAE 147/4 in 18 overs | BATTING: Muhammad Usman 28(16), Amjad Javed 7(11): UAE have reached 147 after the end of 18 overs. The momentum of the match till now has kept on shifting from one team to the other. Muhammad Usman and Amjad Javed will have to do some serious slogging in the final 12 deliveries to help UAE go past 170, which shall be a good score for the match. Kaleem’s two overs are still remaining.

Live Cricket Score, UAE 111/4 in 14 overs | BATTING: Muhammad Usman 1(1), Amjad Javed 0(0): Aamir Kaleem scalps two as Oman strive hard to slow down UAE’s run rate. Muhammad Kaleem got out just after reaching his half century. Mohammad Shahazad also contributed with his 34. The batsmen are finding it tough to read Kaleem’s line. Munis Ansari is bowling along with him. Sufyan Mehmood has been the most economical bowler giving only 22 runs in his four overs. OUT! Mohammad Shahzad b Aamir Kaleem 34(31), OUT! Muhammad Kaleem c Bilal Khan b Sufyan Mehmood 50(40), OUT! Shaiman Anwar c Sultan Ahmed b Aamir Kaleem 12(7)

Live Cricket Score, UAE 77/1 in 10 overs | BATTING: Mohammad Shahzad 26(23), Muhammad Kaleem 37(32): Muhammad Kaleem has upped the scoring rate in the last few overs. Both the batters are batting sensibly and with patience. The second-wicket partnership is now worth 66 runs. UAE would want them to keep going for the next three-four overs before they go all slam bang. A lot of excitement is in store in the match. Oman have brought Mehran Khan and Zeeshan Maqsood into the attack.

Live Cricket Score, UAE 42/1 in 6 overs | BATTING: Mohammad Shahzad 7(10), Muhammad Kaleem 21(21): Muhammad Kaleem is batting at a run-a-ball 21. Shahzad is complementing him pretty well at the other end. Right-arm medium-pacer Sufyan Mehmood is not allowing the batters open their arms. It has been a decent start by UAE but they could had certainly scored some more runs. Powerplay is over which allows the the fielding captain to stretch the field. Let’s see how UAE fares in the middle overs.

Live Cricket Score, UAE 12/1 in 1.4 overs | BATTING: Mohammad Shahzad 0(0), Muhammad Kaleem 0(5): Oman bowled many extras at the start of the innings but they succeeded in sending UAE’s opening batsman Rohan Mustafa back to the hut. Mohammad Shahzad and Muhammad Kaleem, the batters at the crease are both to get off the mark. Mustafa had attempted a quick run after gently caressing the ball towards mid-off but there were issues with his calling and also he did not give full effort to get to the other end. An easy picking for Oman. OUT! Rohan Mustafa run out Aaqib Sulehri 5(8)

Toss: Oman win the toss and decide to field first

Rohan Mustafa was outstanding with both bat and ball to ensure that UAE beat Afghanistan by 16 runs in the opening game of the tournament. He scored a 50-ball 77 opening the innings and finished with 3 for 19 with the ball.  He was well supported by Mohammad Naveed and Farhan Ahmed with the ball as they finished with two wickets apiece. All their batsmen contributed against a strong Afghanistan bowling line-up and put up a good score in the board.

Oman will look to win two games in a row and increase their chances of making it to the play-off stages. This will be the last game before the group stages gets underway and Oman will surely give it their all to win the match and stay alive.

A win for UAE will surely book their place in the group stages as they have won both matches in the tournament so far, but cannot afford to take Oman lightly. 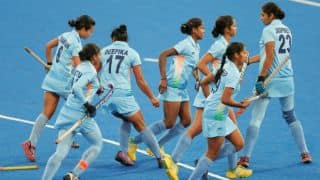 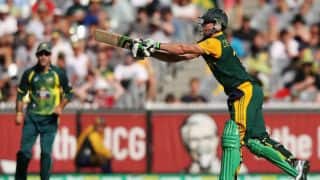 Dear AB de Villiers, why do you need an improvement?