Hello and welcome to CricketCountry s live coverage of Day Three of the Ranji Trophy 2015-16 Group B match between Uttar Pradesh and Madhya Pradesh. Uttar Pradesh posted huge score riding on three massive scores from Almas Shaukat, Mohammad Saif and Sarfaraz Khan. Sarfaraz Khan slammed his first First-Class century on his Ranji Trophy debut for Uttar Pradesh. The 17-year-old smashed 15 fours and four sixes in his 164-ball innings. However, Mohammad Saif was the star batsman for Uttar Pradesh. He fell two short of his double hundred. Even Almas Shaukat, the 19-year-old, playing his first First-Class match, smashed century on debut. He posted 128. This is the highest First-Class score of all the three batsmen. are one of the more powerful sides in this year s Ranji Trophy. Jalaj Saxena of Madhya Pradesh was the only influential bowler for the visitors. He picked up three wickets, picking up the crucial wickets of Shaukat, Sarfaraz and Saif. Read all Ranji Trophy 2015-16 team previews here

LIVE CRICKET SCORE: MP 234/3 in 81.5 Overs; Aditya Shrivastava 99 (254), STUMPS!!!! That’s it for today. MP end the day on a high as despite losing three wickets, they continue to fight the mammoth total of UP. Would be interesting to see how things fair tomorrow.

LIVE CRICKET SCORE: MP 196/2 in 73 Overs; Aditya Shrivastava 79 (225), Naman Ojha 71 (120) The post-tea session has so far gone smooth for MP as they batsmen continue to bat comfortably. he UP bowlers need to step up and bowl a ood delivery in order to get ris of this pair.

LIVE CRICKET SCORE: MP 95/2 in 44 Overs; Aditya Shrivastava 38 (147), Naman Ojha 13 (20) GONE!!!! Udit Birla falls for a healthy 32 as MP lose their first wicket in the post-lunch session and that makes way fro Naman Ojha, who is batting comfortably as of now.

LIVE CRICKET SCORE: MP 61/1 in 28 Overs; Aditya Shrivastava 31 (98), Udit Birla 18 (55) LUNCH!!!! MP continue to bat steadily following the early loss of a wicket. Aditya continues to bat good as he goes just above 30, while Birla looks to settle down.

LIVE CRICKET SCORE: UP 686/7 dec. in 185.1 Overs THAT’S IT!!!! UP declare it at a healthy score of 686, a mammoth total it seems. It’s all now to the MP batsmen and on how they fair in their innings. Triple half-centuries from three UP batsmen defenitely turned things in favour of them.

Earlier on Thursday, Praveen Kumar, captain of Uttar Pradesh won the toss and elected to bat. Shaukat struck century on his First-Class debut on Day One of their Group B Ranji Trophy 2015-16 match. Shaukat received ample support from his opening partner Tanmay Srivastava, as the pair added 125 inside 44 overs in their first innings. While Srivastava eventually fell for 75, Shaukat remained unbeaten on 110, with 17 fours and one six from 274 balls, after the home side elected to bat at the Teerthanker Mahaveer University Ground. 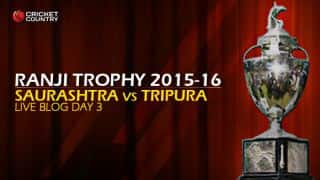