Catch Live Updates of Day Four action of the Ranji Trophy 2015-16 clash between Vidarbha and Maharashtra at Jamtha.

Hello and welcome to CricketCountry’s live coverage of Day 4 of the Group A game of the 2015-16 Ranji Trophy between Vidarbha and Maharashtra , live from Jamtha, Nagpur.Maharashtra resumed the day having 4 wickets in hand but lost quick wicket with only Chirag Khurana putting up some resistance. Thanks to Khurana’s knock of 74 Maharashtra were able to cross the 200 run marking 237 in their 1st innings with Khurana being the last batsman out. Aditya Sarwate was the best bowler for Vidarbha with figures of 3/41 in 21.1 overs. Vidarbha did not start well losing first innings century scorer Faiz Fazal for 4 and were reduced to 6-72 in just 23 overs. Wasim Jaffer made a gritty 33 being the only batsman to offer any top order resistance. Maharashtra at stumps were in their 2nd innings 3/1 trailing by 242 runs. READ: Ranji Trophy 2015-16, full coverage here

Vidarbha in their 2nd innings were all out for mere 149 runs with spinners doing most of the damage. Amol Ubarhande topped scored for them making 47 valuable runs hitting 5 fours and 2 sixes. Akshay Darekar spun a web around Vidarbha batsmen taking 5 wickets giving only 78 runs. Bharatkumar Solanki picked up 2 wicket in his 12 overs. Maharashtra lost a wicket just before end of days play with at a score of 1.

Live cricket scores Maharashtra 162 & 237 | Vidarbha 332 & 149 | Overs 46.3 | Batting: RH Motwani 21(31), BD Solanki 0(1): It is all over here. Vidarbha have beaten Mahrashtra comprehensively here by 82 runs and have secured six crucial points in the process. The stars of Vidarbha’s win have been Faiz Fazal for his first-innings hundred, AA Sarvate for his seven wickets in the match and crucial 33 in the first innings and last but not the least, off-spinner Akshay Wakhare, who picked six wickets in the second innings and a total of seven in the match. It was his second innings effort that sunk Maharashtra.

The visitors didn’t bat to their potential in the entire match. Their effort of 237 and 162 in the match doesn’t quite reflect their batting potential. Vidarbha punched above their weight in the game and won it in the end. Vidarbha will now look to take the momentum in their next match, while Maharashtra would look to iron out their flaws and come up with improved performance in their next game. That’s all from here. Ciao!

Live cricket scores Maharashtra 154/9 & 237 | Vidarbha 332 & 149 | Overs 44 | Batting: RH Motwani 21(31), BD Solanki 0(1): Vidarbha are just a wicket away from a straight win here. Vidarbha off-spinner Akshay Wakhare has taken six wickets so far and is turning out to be a hero for his team. He’s found able support in AA Sarvate, who has taken the remaining three wickets. Maharashtra would be terribly disappointed by their batting effort.

Live cricket scores Maharashtra 133/6 & 237 | Vidarbha 332 & 149 | Overs 33 | Batting:  CG Khurana 3(13): The match is fast slipping out of Maharashtra’s hands. They’ve lost their star batsman Kedar Jadhav. AA Wakhare has taken a five-wicket haul and is hurting Maharashtra’s prospects in the match. The hosts need just four wickets to win. While the task for Maharashtra is cut out, as they need 112 more runs to win.

Live cricket scores Maharashtra 114/4 & 237 |  Vidarbha 332 & 149 | Overs 26 | Batting: KM Jadhav 27(35), CG Khurana 3(13): This game is set for a fantastic finish. Chasing 245, Maharashtra are four down already against a side which wasn’t supposed to win against them. Vidarbha are definitely punching abpve their weight here. They’ve done a commendable job in getting the better off a strong Maharashtra batting. 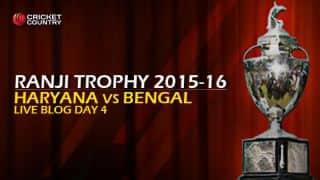