Umesh Yadav put Vidarbha on top on Day 2 with a century to guide his side to 467.

Hello and welcome to CricketCountry’s live coverage of Day Three of the Ranji Trophy 2015-16 Group A match between Vidarbha and Odisha at the Vidarbha Cricket Association Stadium in Jamtha, Nagpur on Saturday. The hosts are clearly on top in the game at the moment, after centuries from Aditya Shanware (119) and Umesh Yadav (128 not out) helped guide Vidarbha to a commanding total of 467. Ganesh Satish (53), Jitesh Sharma (49) and Ravi Jangid (40) also contributed to the total with useful knocks of their own. Umesh’s knock came at a stage when Vidarbha had lost a few wickets in quick fashion, as Odisha seemed to have brought themselves back into the game. The right-arm pacer however, struck seven fours and as many sixes during his 119-ball innings, with the hosts adding 174 runs for the last two wickets. Odisha, in reply, lost both the openers in the last session, with Girija Rout and Nataraj Behera departing for scores of 25 and 18 respectively. Odisha’s score read 79 for 2 after 34 overs at the end of the day’s play. Read all Ranji Trophy 2015-16 team previews here

LIVE CRICKET SCORE: Odisha 15/0 in 8 Overs; Girija Rout 13 (30), Natraj Behera 1 (18) — STUMPS!!!! That’s it for Odisha today. Having suffered a follow on, Odisha must make sure that they earn a healthy lead or at least bat out the whole day on day 4 to have any chance to draw this game.

LIVE CRICKET SCORE: Odisha 9/0 in 2 Overs; Girija Rout 8 (10), Natraj Behera 0 (2) — FOLLOW ON!!!! Odisha have been bowled out for 274 and Vidarbha have enforced the follow on as they arer currently just nine on the baord for no loss. Can Vidarbha claim the game?

LIVE CRICKET SCORE: Odisha 249/8 in 88 Overs; Govinda Poddar 128 (238), Basant Mohanty 9 (53) — Century for Poddar as he plays a good innings in pressure situation. While Mohanty is playing a very slow innings as he just look sto support Poddar rather than playing.

LIVE CRICKET SCORE: Odisha 202/8 in 74 Overs; Govinda Poddar 84 (183), Basant Mohanty 6 (19) — Slow start to the post-lunch session by Odisha as they loos to save the wickets and to lower the gap of the runs they trail by and also look to avoid the follow-on at any cost.

LIVE CRICKET SCORE: Odisha 111/2 in 44 Overs; Govinda Poddar 32 (88), Anurag Sarangi 30 (73) — Odisha too seem to be going strong as they look to match down the total of Vidarbha of 467 and possibly take a lead with eight strong wickets intact with them. However, they must make sure not to lose firther wickets from hereon as they might suffer a setback in the quest. 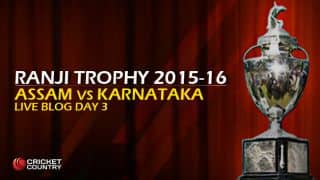