Saurashtra resume from their overnight score of 70/1, 81 runs away from Vidarbha's first innings total.

Hello and welcome to CricketCountry’s live coverage of Day Two of the ongoing first quarter-final of the ongoing Ranji Trophy 2015-16 between Vidarbha and Saurashtra at the Dr PVG Raju ACA Sports Complex in Vizianagaram on Wednesday. Saurashtra are well-settled at the moment, having dismantled Vidarbha out for a lowly 151 thanks to Jaydev Unadkat’s fifer before finishing the day on a strong response of 70 for the loss of one wicket. Saurashtra won the toss and chose to field, with Vidarbha losing both their openers at the start of their innings. Vidarbha kept losing quick wickets thereafter, and probably would have been bowled out for much less than 100 had it not been for the efforts of veteran campaigner Wasim Jaffer (41 off 86 balls), as well as those of pacer Umesh Yadav (25 off 16 balls) as well as Ganesh Satish (21 off 39 balls). Jaydev Unadkat was the pick of the bowlers taking five wickets for 70 runs, including the last three wickets of the innings in a destructive second spell.

Live Cricket Score, Vidarbha 17/0 in overs 7, Batting: Faiz Fazal 11(18), JM Sharma 6(24): And it’s stumps! Saurashtra have put up a huge 375 in their second innings and have gained a lead of 207. Sagar Jogiyani and Sheldon Jackson scored individuals centuries and remained the heroes of their innings.

Live Cricket Score, Saurashtra 326/6 in overs 96.4, Chirag Jani 9(34), Deepak Punia 1(7): Vidarbha bowlers get into action but it’s too late. The damage has been done and the Saurashtra team has earned a good lead already. They still have 4 wickets in hand and can take the run easily to 400.

Live Cricket Score, Saurashtra 283/3 in overs 84, Sagar Jogiyani 109(225), Sheldon Jackson 117(169): And the Vidarbha bowlers are yet to get any success with the ball. It will be hard for their batsmen if Saurashtra get a huge lead. Their team score is steadily approaching 300. Both the batsmen have got their individual centuries and look very set now to be dismissed.

Live Cricket Score, Saurashtra 244/3 in overs 71, Sagar Jogiyani 83(191), Sheldon Jackson 104(123): The two batsmen have successfully built up a strong partnership. 100 came up for Sheldon Jackson and quite a quick one. Jackson hit 12 fours in the process. The Vidarbha bowlers don’t have any answer to the sensible batting so far and are being hammered.

Live Cricket Score, Saurashtra 198/3 in overs 61, Sagar Jogiyani 76(163), Sheldon Jackson 65(91): Sagar Jogiyani has turned the hero for Saurashtra and Sheldon Jackson is providing the proper support from the other end. They are close to the 200 run mark and have gained a lead by 47 runs. They still have many wickets in hand as the Vidarbha bowlers have failed to get many wickets.

Live Cricket Score, Saurashtra 107/3 in overs 41, Sagar Jogiyani 40(107), Sheldon Jackson 12(27): Starting from 70/1 after stumps of Day 1, Saurashtra lost two wickets today as Cheteshwar Pujara missed on his half century by 3 runs and Vasavada went for a solitary run. 100 is up for Saurashtra while Vidarbha was all out for 151.

After their shambolic performance with the bat, Vidarbha seemed to have brought themselves along the path towards redemption after Saurashtra opener Avi Barot was dismissed for 5 with only 10 runs in the team’s board. Vidarbha however, deviated from the path soon enough as Cheteshwar Pujara combined forces with Sagar Jogiyani to add 60 runs for the second wicket till the end of the day’s pay without letting another wicket fall. Pujara was batting with quick pace, racing to 45 off 70 balls with the help of nine boundaries. Jogiyani, on the other hand, was playing the ideal supportive role at the other end, having scored a mere 19 runs off 87 deliveries. 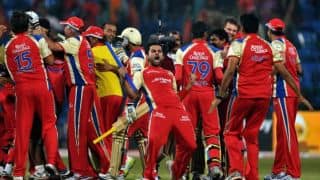