Bengal are currently struggling at the 2nd-last spot in Group D, and desperately need a win to stay afloat.

Hello and welcome to CricketCountry’s live blog for the Vijay Hazare Trophy 2015-16 Group D match between Bengal and Madhya Pradesh (MP) at the Saurashtra Cricket Association Stadium in Rajkot on Thursday. Madhya Pradesh leapt to the third position in the points table after their dominant eight-wicket win over Uttar Pradesh in their previous match at the same venue, and MP will be bolster their chances of sealing a quarter-final berth with a win in the upcoming game. Meanwhile, Bengal are narrowly ahead of Goa to sit in the second-last position with a mere four points, which came off a six-wicket victory over Goa in the first Group D game of the tournament.  Vijay Hazare 2015-16: Full coverage here

LIVE CRICKET SCORE: Madhya Pradesh 263/5 |  Overs 46.5 | Target 263 | BATTING: Anand Singh Bais 54(54), Parth Sahani 31(27): Madhya Pradesh win this match by five wickets with 19 balls remaining. Anand Singh Bais and Parth Sahani took MP to victory and remained unbeaten on 54 and 31 respectively. Both batted at a fast pace; just what the situation demanded from the duo. Harpreet Singh Bhatia was the top scorer for MP with 71 runs while Bengal batter Sayan Shekhar Mandal was the top scorer of the match with his 88 off 109 deliveries.

LIVE CRICKET SCORE: Madhya Pradesh 218/5 |  Overs 40.3 | Target 263 | BATTING: Anand Singh Bais 36(38), Parth Sahani 5(5): The match has reached its climax with Madhya Pradesh now needing 45 runs off 57 balls with five wickets remaining. MP have batted well and it looks like that they will succeed in pulling off a victory here at Rajkot. The last wicket to fall was of Venkatesh Iyer, who scored 31 runs. OUT! Venkatesh Iyer c Manoj Tiwary b Ashok Dinda 31(34)

LIVE CRICKET SCORE: Madhya Pradesh 190/4 |  Overs 37 | Target 263 | BATTING: Anand Singh Bais 20(28), Venkatesh Iyer 24(28): Harpreet Singh Bhatia is stumped for 71 runs. He hit nine fours in his knock. Venkatesh Iyer has come to the middle after the fall of Harpreet. He is batting along with Anand Singh Bais and their partnership is now worth 36 runs. MP now needs 73 runs in 78 balls. Match can go either way currently. OUT! Harpreet Singh Bhatia st Wriddhiman Saha b Pragyan Ojha 71(72)

LIVE CRICKET SCORE: Madhya Pradesh 143/3 |  Overs 27 | Target 263 | BATTING: Harpreet Singh Bhatia 70(67), Anand Singh Bais 5(3): Rajat Patidar gets out after a good 63-run knock. He hit seven boundaries and a six in his innings. The third wicket partnership was worth 135 runs. Harpreet Singh Bhatia is batting faster than run a ball. He has struck nine shots to the fence so far. Anand Singh Bais is the new batter at the crease. Madhya Pradesh now needs 120 runs off 132 ball to win. They have seven wickets left. OUT! Rajat Patidar b Amir Gani 63(78)

LIVE CRICKET SCORE: Madhya Pradesh 97/2 |  Overs 20.4 | Target 263 | BATTING: Rajat Patidar 47(61), Harpreet Singh Bhatia 42(47): Rajat Patidar needs three more runs to get to his fifty. Harpreet Singh Bhatia too is approaching his half century. This third wicket partnership has bailed Madhya Pradesh out of trouble to some extent. MP lost their second wicket when there were just seven runs on board. Hence, Patidar and Bhatia’s partnership has fetched MP 90 runs and it is going strong. MP requires 166 runs off 176 balls from here on; they have eight wickets in hand. The match is more or less in balance at the moment and can go either side.

LIVE CRICKET SCORE: Madhya Pradesh 5/1 |  Overs 2.2 | Target 263 | BATTING: Rajat Patidar 0(6), Naman Ojha 0(7): Madhya Pradesh have started their chase of Bengal’s 262 but lost their first wicket on the eighth ball of the match itself. Jalaj Saxena is caught by keeper Wriddhiman Saha off Mohammed Shami’s delivery; he scored two runs. Rajat Patidar and Naman Ojha are batting at the moment. Having faced six and seven balls respectively, they are yet to get off the mark. OUT! Jalaj Saxena c Wriddhiman Saha b Mohammed Shami 4(2)

LIVE CRICKET SCORE: Bengal 106/1 |  Overs 21.1 | BATTING: Sayan Shekhar Manadal 53(62), Wriddhiman Saha 0(1): Abhimanyu Eswaran gets out just five short of his half century. He hit four boundaries in his knock. Wriddhiman Saha has come to the middle. He is batting along with Sayan Shekhar Mandal. Sayan has reached his fifty having struck five shots to the fence so far. Bengal are in a commanding position now. OUT! Abhimanyu Eswaran c Harpreet Singh Bhatia b Chandrakant Sakure 45(65)

Bengal suffered a four-wicket defeat at the hands of Uttar Pradesh on Saturday, December 13, with Umang Sharma hitting an impressive 73 under pressure to guide his side to victory with a little more than three overs to spare. UP however, went on to lose to MP convincingly after getting restricted to 211, before wicketkeeper-captain Naman Ojha and Harpreet Singh remained unbeaten on 114 and 63 respectively to guide their side to a one-sided win. 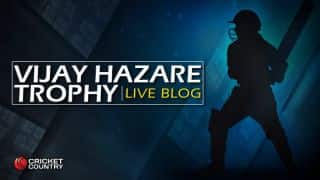