Welcome to CricketCountry's live coverage of Vijay Hazare Trophy 2015-16 match between Karnataka and Haryana at Bengaluru.

Namaste! Hello and welcome to CricketCountry’s live coverage of Vijay Hazare Trophy 2015-16 match between Karnataka and Haryana in Bengaluru. Both the teams had a close first-match in the tournament, with Karnataka losing off the last ball while Haryana registering a nine-run win. Karnataka were up against Railways while Haryana too on Kerala in their respective matches. With the win, Haryana now have four points going ahead into the tournament while Karnataka are yet to open their account. Both the teams again would look to come up with a stellar performance as they aim to improve their league standings in the premier One-Day tournament.

LIVE CRICKET SCORE: Haryana 204 in overs 46.3 | Target 242 | BATTING: Rahul Dagar 96(116): Karnataka win by 38 runs. The Haryana batting line-up never looked quite comfortable in front of the Karnataka bowling and they went on to lose wickets. Only Rahul Dagar lasted till the end and scored an unbeaten 96. For Karnataka, it was Jagdisha Suchith who scored 46 runs and took two wickets as well.

LIVE CRICKET SCORE: Haryana 66/3 in overs 22 | Target 242 | BATTING: Rahul Dagar 23(50), Rohit Sharma 33(67): After batting brilliance, Karnataka are doing it with the ball as well. They have already removed the top-order of Haryana within their team score of 10 runs. It is becoming more and more tough for the Haryana team.

LIVE CRICKET SCORE: Karnataka 242/9 in overs 50 ; BATTING: Mithun A 12(7), Arvind Sreenath 1(1): Vinay Kumar 38(27), Mithun A 1(1): The match is equally poised by both the teams and anyone can win it here. Haryana have some able batsmen who can chase the run easily enough if they get going.

LIVE CRICKET SCORE: Karnataka 78/2 in overs 24 ; BATTING: Manish Pandey 20(34), KL Rahul 32(56): Though the Karnataka side have lost 2 wickets, they have KL Rahul and Manish Pandey at the crease who can turn the match around for them. A good partnership will do it for the Karnataka while Haryana need more wickets.

For Karnataka, it was a heartbreak loss against Railways. With the kind of international players at their disposal, they looked to be the team to beat. Their famed batting line-up failed against some good bowling by Railways and skipper Vinay Kumar had to come to the rescue, who led from the front by scoring unbeaten 50 and taking four wickets. But his efforts went in vain as Railways overcame the victory target of 229 on the last ball and won the match. The formidable unit would now look to make amends at their home ground.

On the other hand, Haryana managed to beat Kerala by nine runs. Kerala skipper Sachin Baby’s 95 went in vain as the Haryana spin duo of Amit Mishra and Jayant Yadav shared six wickets between them and spelled doom for Kerala. Haryana would now look to continue with their winning run. 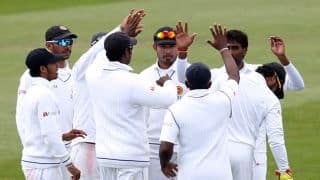