Karnataka will aim for victory against the winless Jammu and Kashmir in the upcoming match.

Hello and welcome to CricketCountry’s live coverage of the upcoming Vijay Hazare Trophy 2015-16 Group B match between Karnataka and Jammu and Kashmir (J&K) at the M Chinnaswamy Stadium in Bengaluru on Friday, December 18. Karnataka are placed third in their group at the moment, after winning three and losing a couple in their five games in the round-robin stage so far, while J&K will be playing for pride in the upcoming match, having been knocked out for good after losing all five matches that they’ve featured in so far. For Karnataka, winning this match by a big margin is a must lest they intend to pile further misery on themselves after they were knocked out of the ongoing Ranji Trophy 2015-16 in the group stage, finishing fifth in Group A.

Live Cricket Score: Jammu and Kashmir 142 | Overs 27.3 | Target 350 | BATSMEN: Omar Alam 3(6): All over at Bengaluru, Suchith J dimisses Rohit Sharma on the thrid delivery of the 28th over to end J&K’s innings and hand them a 207-run defeat. While Shreyas Gopal, Vinay Kumar and Aravind Sreentah bag two wickets each, Suchith J has three to his name and Abhimanyu Mithun who had claimed the second wicket of the innings. This victory earned Karnataka a total of 4 points. OUT! Sandeep Singh lbw Suchith J 20(34), OUT! Rohit Sharma LBW Suchith J 0(1)

Live Cricket Score: Jammu and Kashmir 135/8 | Overs 25 | Target 350 | BATSMEN: Sandeep Singh 15(25), Omar Alam 1(1): Shreyas Gopal strikes this time for Karnataka, two wickets on two deliveries for him, leaving their opponents at 130 for 8. He missed a hat-trick as new batsman Omar Alam survives his dleivery following the dismissals of Zahoor Sofi & Waseem Raza in the 25th over. From here, J&K need another 213 runs to win this contest. OUT! Waseem Raza st C M Gautam b Shreyas Gopal 11(19), OUT! Zahoor Sofi c Manish Pandey b Shreyas Gopal 0(1)

Live Cricket Score: Jammu and Kashmir 119/6 | Overs 21 | Target 350 | BATSMEN: Sandeep Singh 9(20), Waseem Raza 2(2): Sreenath Aravind and Vinay Kumar share four wickets between each other with both bagging two wickets each. The other two dismissals were made by Abhimanyu Mithun and Suchith J. The last batsman to get out was Parveez Rasool. He scored 14 in 19 balls before giving a catch to kaun Nair off Vinay Kumar’s bowling in the 20th over, leaving Jammu and Kasmir at 115 for 6. From here, they need another 231 runs to win. OUT! Bandeep Singh c Suchith J b Arvind Sreenath 42(32), OUT! Ian Chauhan c C M Gautam b Arvind Sreenath 35(29), OUT! Nadeem Ahmed Dar c C M Gautam b Suchith J 1(4), OUT! Parvez Rasool c Karun Nair b Vinay Kumar R 14(19)

Live Cricket Score: Jammu and Kashmir 33/2 | Overs 6 | BATSMEN: Bandeep Singh 13(9), Ian Chauhan 6(6): Jammu and Kashmir lose two wickets, Karnataka are off to a great start defending their 349. Both Vinay Kumar and Mithun bag a wicket each. Shubham Khajuria was the last batsman to get dismissed, leaving J&K at 14 for 2. From here, they nedd another 322 runs to beat Karnataka, which definitely is a huge task for J&K. OUT! Asif Rasool c Karun Nair b Vinay Kumar 13(12), OUT! Shubham Khajuria c C M Gautam b Mithun A 1(9)

Live Cricket Score: Jammu and Kashmir 13/0 | Overs 2 | BATSMEN: Asif Rasool 13(11), Shubham Khajuria 0(1): J&K are off to a decent start, 13 runs after 2 overs. Vinay Kuamr and Abhimanyu Mithun have opened bowling for Karnataka from both the ends.

Live Cricket Score: Karnataka 349/5 | Overs 50 | BATSMEN: C M Gautam 1039(102), Vinay Kumar 51(19): Meanwhile, Vinay KUmar flew to an excellent fifty in just 19 balls as Karnataka finish their firts innings at 349. CM Gauatm remianed unbeaten at 109 off 102 balls. Waseem Raza and Zahoor Sofi who made brekathroughs at the right times for J&K failed to strike at the end when their side desperately needed breakthroughs to stop the defending champions to score big. Now Vinay Kumar will take the charge with the ball!

Live Cricket Score: Karnataka 332/4 | Overs 49 | BATSMEN: C M Gautam 103(100), Vinay Kumar 41(16): Superb century for CM Gautam. He did not feel any pressure even when Karnataka were in a poor postion. It was the 145-run partnership between Gautam and Manish Pandey that helped Karnataka recover after the early fall of wickets. However, the Karnataka batsmen ensured that runs were scored on regular intervals even when the wickets fell.

Live Cricket Score: Karnataka 318/5 | Overs 48 | BATSMEN: C M Gautam 96(96), Vinay Kumar  34(14): Parvez Rasool brought an end to Manish Pandey’s innings in the 44th over, leaving Karnataka at 258 for 5. Pandey scored 79 in 70 balls before giving a catch to Bandeep Singh on the fifth dleivery of the 44th over. However, teh run rate did not go down with Pandey’s dimissal as the skipper is on fire at the moment. He already has 34 runs on board. His innings inlcudes four SIXES and one boundary so far in the innings. OUT! Manish Pandey c Bandeep Singh b Parvez Rasool 79(70)

Live Cricket Score: Karnataka 228/4 | Overs 40 | BATSMEN: Manish Pandey 66(62), C M Gautam 53(71): FIFTY for CM Gautam! Meanwhile, Manish Pandey is still on crease playing a superb innings under pressure. 100 partnership comes up for the dup for the fifth wicket. 10 overs to go, Karnataka will want these two to remain unbeaten and help them cross the 250-260-mark.

Live Cricket Score: Karnataka 170/4 | Overs 32 | BATSMEN: Manish Pandey 54(45), C M Gautam 17(38): A boundary and excellent half-century for Manish Pandey. That is followed by a single from him. Once again, Pandey has come as a rescue when Karnataka were struggling. Now all Gautam has to do is give his aprtner the support from the otehr end. Pandey is capable of taking Karnataka to a comeptetie score single-handedly, provided he has that support from his temamates. With this, it is 50-run partnership between these two. Good cricket by the duo!

Live Cricket Score: Karnataka 128/4 | Overs 23.3 | BATSMEN: Manish Pandey 22(21), C M Gautam 8(11): WIKCET! Karnataka might see themselves in trouble as they are suddenly four-down with just 125 runs on board. Waseem Raza claims a second scalp of the match as he dismissed new batsman Samarth R. The latter scored an eight-ball eight before Raza;s caught and bowled that left Karnataka at 113 for 4. That dismissal brought the wicketkeeper-batsman CM Gautam on the crease. OUT! Samarth R c & b Waseem Raza 8(8)

Live Cricket Score: Karnataka 103/3 | Overs 18 | BATSMEN: Manish Pandey 6(9), Samrath R 2(3): Zahoor Sofi strikes again, Karnataka loses Karun Nair. That was followed by the wicket of Mayank Agarwal who looked untroubled until the 19th over. Waseem Raza bags his first wicket of the match as Agarwal gave a catch to  Sandeep Singh on the last delivery of the 19th over. Karnataka are coming off a superb win in their previous match where they had restricted Kerala at 49. The defending champions will want to continue the same momentum. OUT! Karun Nair b Zahoor Sofi 18(23) OUT! Mayank Agarwal c Sandeep Singh b Waseem Raza 47(56)

Live Cricket Score: Karnataka 62/1 | Overs 12 | BATSMEN: Mayank Agarwal 27(36), Karun Nair 10(14): Karnataka are off to a good start, going at a rate of almost 6. Although Jammu and Kashmir made an early breakthrough with the wicket of KL Rahul, Nair and Agarwal have managed to help Karnataka recover. OUT! K L Rahul LBW Zahoor Sofi 22(22)

Karnataka, who had emphatically won their second consecutive title in the previous season, thrashed Kerala in a completely one-sided contest in their previous Group B fixture at Bengaluru. Kerala were bowled out for a meagre 49 in 22 overs, with Shreyas Gopal leading the destruction with figures of 5 for 19. Karnataka then chased the target down in less than six overs, though opener Mayank Agarwal was dismissed during the course of the innings. It turned out to be the second-shortest match in the history of the tournament. 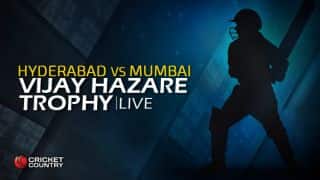 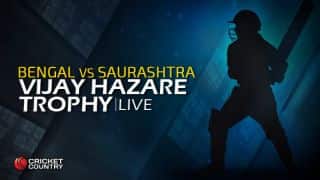