A win for either team could see them go to the second position in group B.

Hello and welcome to CricketCountry s live cricket blog of the Vijay Hazare Trophy 2015-16 tournament, between Karnataka and Kerala at M. Chinnaswamy Stadium at Bengaluru. Karnataka lost their previous match to Jharkhand by a convincing 47 runs and will have to immediately bounce back in this game against Kerala. Karnataka are currently struggling with eight points and are current,y placed at the fifth position in group B. Kerala are a couple of places higher that Karnataka, just on superior run-rate. Group B is an extremely close group as a win for either team could see them jump to the second spot. Kerala won their previous match and Jammu & Kashmir (J&K) by seven wickets. Vijay Hazare 2015-16: Full coverage here

LIVE CRICKET SCORE: Kerala 16/3 | Overs 10 | BATTING: Nikhilesh Surendran 11(23), Sachin Baby 0(9): Karnataka draw first blood. Vinay Kumar sends Vasudevan Jagadeesh back to the dugout for a duck. He follows it up with Rohan Prem’s wicket; he scored two runs. Sanju Samson is cleaned up by medium pace bowler Abhimanyu Mithun for a naught. Kerala are now tottering on 16 for the loss of three wickets after 10 overs. They need a partnership. Nikhilesh Surendran and Sachin Baby have taken their time to get their eye in. Sachin has faced nine deliveries but is yet to open his account. OUT! Vasudevan Jagadeesh c Gautam b Vinay Kumar 0(4), OUT! Rohan Prem c Manish Pandey b Vinay Kumar 2(18), Sanju Samson b Abhimanyu Mithun 0(6)

Kerala managed to bowl J&K for 130 with Fabid Ahmed picking up three wickets for them. Nikhilesh Surendran opened the bating for Kerala and scored an unbeaten 85, guiding his team to a comprehensive win. Kerala will be looking to carry their momentum on to this game against Karnataka and somehow beat the defending champions. Inspite of a four-wicket haul from Jagadeesha Suchith, Karnataka could not beat Jharkhand. Their bowlers did well to restrict Jharkhand to 216, but their batsmen failed to get anywhere close as Shahbaz Nadeem’s three wickets destroyed their batting.

Karnataka will have to step up their batting as they have struggled to reach over 200 in every match. Just one or two individual performances get their scores past the 200-run mark. They do have a good batting line-up with the likes of Mayank Agarwal, Manish Pandey and Karun Nair in their ranks. But they will have to click as a team, if they want to retain their title. 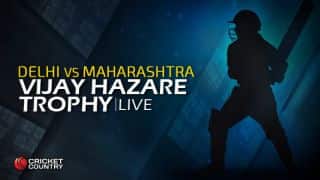