Good Morning! Hello and welcome to CricketCountry's live coverage of Vijay Hazare Trophy 2015-16 match between Kerala and Railways at the Alur

Good Morning! Hello and welcome to CricketCountry’s live coverage of Vijay Hazare Trophy 2015-16 match between Kerala and Railways at the Alur. Kerala’s first Group B match was against Haryana in what an exciting contest only for Kerala to lose by nine runs. On the other hand, Railways were also engaged in a thrilling contest but they came out on the better side of results. Their match against Karnataka at Bangalore was won by them with just one wicket to spare. Moreover, they got their winning runs of the very last delivery. After that match Railways will surely have the competitive edge in the proceedings.

LIVE CRICKET SCORE: Railways 196 in overs 43.1 | Target 257 | BATTING: K K Upadhyay 2(5): Kerala win by 60 runs. V A Jagadeesh was the batsman who helped Kerala get domination over as he scored 121 that resulted in a good total of 256 for Railways to chase but the latter failed.

LIVE CRICKET SCORE: Railways 148/3 in overs 28 | Target 257 | BATTING: Arindam Ghosh 53(61), Saurabh 72(83): A good start of chase by the Railways. The total is tough but the way they are playing, it seems easy to achieve. The game is swinging equally both ways and anyone can win. A wicket here can become the turning point.

LIVE CRICKET SCORE: Kerala 256/8 in overs 50; BATTING:Manu Krishnan 6(3), Basil Thampi 1(1): Kerala has played really well and has put up a good score. 250 Plus is always a reliable score and Jagadeesh with his 137-ball 121 has helped Kerala achieve that.

LIVE CRICKET SCORE: Kerala 118/2 in overs 28 ; BATTING: V A Jagadeesh 47 (74), Rohan Prem 35 (40): Kerala are doing good and Jagadeesh is looking forward to score his half century. Rohan Prem is also playing well and giving the support to Jagadeesh. They need to carry on with the partnership.

Railways’ effort was a well-rounded one especially in the bowling department. Akshat Pandey took a three-wicket as did Ashish Yadav. Karn Sharma and Anureet Singh shared three wickets between them with Karn taking two. Ashish was the pick of the bowlers as he conceded a paltry 25 runs for his three wickets in the stipulated 10 overs. In the batting area, they got a total of thee half centuries with none of them making it past 51. Asad Pathan and Mahesh Rawat scored exact 50s while Karn did one better.

For Kerala, Fabid Ahmed and Sandeep Warrier took identical figures in their 10 overs. They conceded 35 runs and took two wickets each. In the batting, Sachin Baby waged a lone battle scoring 95 before getting run out in the dying stages of the game. Mohammad Azharudeen, Sanju Samson and Padmanabhan Prasanth got starts but threw them away before converting them into something substantial. 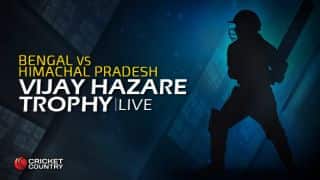