The West Indies were left facing a tall order after their inexperienced top order was exposed on the second day of the second Test against Australia at Queen's Park Oval on Monday. 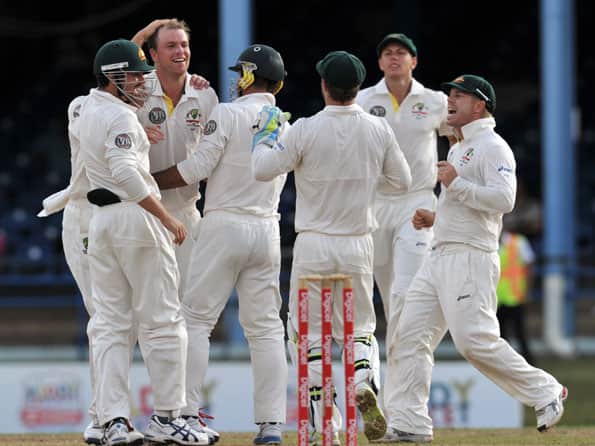 The West Indies were left facing a tall order after their inexperienced top order was exposed on the second day of the second Test against Australia at Queen’s Park Oval on Monday.

Responding to Australia’s 311 all out, the West Indies stumbled to 49 for three at the close of play Monday, still 262 runs short of their target and with much to do on a difficult pitch.

Stylish left-hander Darren Bravo was unbeaten on 16 while veteran campaigner Shivnarine Chanderpaul was one not out, when fading light ended play with several overs left in the day.

The West Indies had earlier done well to wrap up the Australian innings after the tourists threatened to run away with the game, courtesy of a 89-run seventh-wicket stand between Mike Hussey and James Pattinson.

The left-handed Hussey stroked 73 off 207 balls with four fours and a six while Pattinson hit 32 off 119 balls with five fours.

However, fast bowler Kemar Roach claimed five for 105, his third five-wicket haul in Tests, as the West Indies sent the last four Aussie wickets tumbling for 14 runs in the space of just 28 balls.

Off-spinner Shane Shillingford finished with three for 92 while part-time off-spinner Narsingh Deonarine picked up two for 32.

The West Indies were in early trouble when Kraigg Brathwaite fell without scoring for the second time in as many innings, lbw to seamer Ben Hilfenhaus in the fourth over of the innings without a run on the board.