West Indies will go into the second day of the second Test match against New Zealand with confidence after bowling out the opposition for a modest total of 221 runs on the board. On a wicket with spongy bounce at Port of Spain, Trinidad, Jerome Taylor, the comeback man went onto take four wickets. Sulieman Benn, the slow left-arm orthodox went onto take three wickets as well. Catch live scores and ball-by-ball commentary of the second day’s play between West Indies and New Zealand

For New Zealand, Tom Latham, the opening batsman went onto score 82 and top-scored for his country. Kane Williamson and Ross Taylor made 40s. But both of them weren’t able to convert it into a big score. New Zealand though, did take the wicket of Chris Gayle playing in his 101st Test match. He was cleaned up by Trent Boult, the left-arm swing bowler. Catch the live blog here.

New Zealand need early wickets on the second day. New Zealand won the first Test match of the series  by a huge margin. Now, they are looking to win a Test series in the West Indies only for the second time in their history. 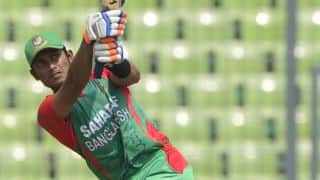 England vs Sri Lanka 2014: Alastair Cook certainly not in a comfortable state of mind as captain