Follow the live scorecard of the fifth ODI between Afghanistan and Scotland.

Ireland are taking on Afghanistan in the fifth One-Day International (ODI) of the Dubai Triangular Series 2014-15. This match is being played in Dubai and the whole tournament has been an important for the teams for their buildup to the ICC World Cup 2015. This tournament gives them vital match practice before the teams head Down Under for the big event. Scotland is the other team in the tournament. So far, Ireland are leading the table with Scotland second. Afghanistan need to win this game to move to four points.

CricketCountry’s preview to the game noted, “The O’Brien brothers, Kevin and Niall, have been in great form for Ireland. Niall anchored Ireland’s chase against Scotland with an innings of 81, while Kevin has put in handy contributions with both bat and ball for the side. Spinner George Dockrell has excelled with the ball. Afghanistan will need more than just Ahmadi to fire in the batting line-up if they are to overhaul the Irish challenge. Usman Ghani and Afsar Zazai have the potential to score plenty of runs, and if they strike form, it could make for a tough contest.” 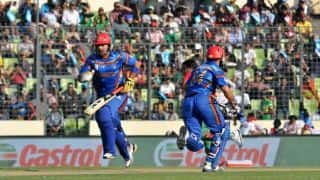