Afghanistan won the first match against Scotland and will be keen to emerge victorious again.

Afghanistan take on Scotland in the fourth One-Day International (ODI) at Abu Dhabi. Ireland managed to beat Scotland by three wickets in the previous match of the series. But Scotland had some positives in their batting. Matt Machan scored a brilliant 86, that took his side past the 200-run mark. All-rounder Richie Berrington’s 28 runs late in the innings was crucial as Scotland managed to reach a competitive 216 for nine in 50 overs.

Iain Wardlaw was the pick of the Scotland bowlers but his figures of three for 49 was not bale to prevent his side from losing. Ireland were clinical in their performance and courtesy of an unbeaten 80 by Niall O’Brein and a late onslaught by John Mooney ensured that Ireland reached their target with 21 balls to spare.

In the last match they faced each other, Scotland got to a respectable total off 237 in their 45 overs, but Afghanistan hit back hard and made a cakewalk out off the target. They chased down the total off 38 overs, with 8 wickets in hand. Javed Ahmadi was the top scorer with  a 81-ball 74. The other Afghani batsmen also put i significant contributions. Opener Usman Ghani smashed 48 off 39 before getting out to Richie Berrington.

Afsar Zazai and Nasir Jamal were the batsmen who saw Afghanistan over the line in that match. Zazai was unbeaten on 48, while Jamal just got past 50, taking Afghanistan comfortably over the line. Apart from Berrington in the bowling department and Hamish Gardiner with a 96 in the batting department, he Scots didn’t put up any fight.

But Afghanistan was up against a much more competitive Ireland in the next match of the series. They got wrapped up for 180, with opener Ahmadi contributing with a 81. The rest off the batting line up didn’t have a response to the outstanding bowling by the Irish. But bowling continued to remain Afghanistan’s strength, as Ireland finally got through with only seven wickets in hand. Ahmadi took four wickets to cap off a brilliant all-round performance. 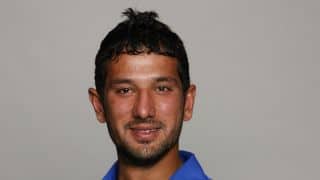