Zimbabwe fought hard in their last series against Afghanistan, but were just not strong enough to match the rising Afghan players, as they succumbed to a thrilling 2-3 defeat in the ODI series. Following the series against Afghanistan, they also lost an away series to Bangladesh 3-0. Zimbabwe have had gone through a rough patch in the year so far and would definitely aim to finish the year on a high.Afghanistan, on the other hand, enjoyed their maiden series win when they beat Zimbabwe, and will again come across them in UAE. Afghanistan will aim to defend themselves and their previous win, as well as prove that they are the new rising force in Asian and world cricket. Live Cricket Score, Afghanistan vs Zimbabwe 2015-16, 1st ODI art Sharjah

Considering the match being played in Sharjah, it is expected to be a flat track which means the batsman would be the ones to watch out for. The match is expected to be a high-scoring one. Although Afghanistan do not have many power hitters, they could still be a threat owing to their good batting skills. Afghanistan take on Zimbabwe in the first of the five-match One-Day International (ODI) series at the Sharjah Cricket Association Stadium on Friday. Zimbabwe, who are coming off an embarrassing 2-3 series loss to Afghanistan when they met at home a couple of months ago, would aim for payback when they take on the Asian minnows, this time in an away series.

However, Afghanistan, who have steadily improved over the last couple of years, would look to carry forward their winning momentum in UAE and inflict further damage on the already wounded Zimbabwean side. 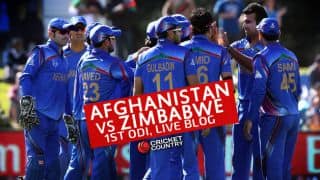