Afghanistan won a nail biting last over first T20I against Zimbabwe on Friday, lead the series 1-0.

Afghanistan defeated Zimbabwe by five runs in a thrilling Twenty20 clash in the first of their two match T20I series on Friday, following their triumph in the one-day series winning 3-2. Even though the result was controversial after Dawlat Zadran was allowed to keep bowling the 20th over despite having sent down two waist-high full tosses. For Afghanistan it was another collective effort and further proof of their ever-improving batting. Mohammad Shahzad again managed  an explosive start at top of the order and the rest of the innings just flowed in delightful fashion. Live Cricket Scorecard: Afghanistan vs Zimbabwe 2015-16, 2nd T20I at Sharjah

Gulbadin Naib produced a fantastic knock in the latter stages of the game to take Afghanistan to a truly challenging total. Zimbabwe’s bowling was a bits and pieces effort. The seam bowlers showed glimpse of accuracy but were wayward for most part, something they can’t afford at their pace. Graeme Cremer continued to impress bowling four overs from which he conceded just 17 runs and took three wickets, credit to his clever variations. READ: Afghanistan pull off a nail-biting 5-run win vs Zimbabwe in 1st T20I at Sharjah

Zimbabwe’s response with the bat was quite admirable especially against the quality attack Afghanistan possess. Malcolm Waller’s unbeaten 37-ball 49 was one of the star performances. Zimbabwe definitely need more in the batting  line-up to get their game up. As the teams match up for the second T20I, Zimbabwe will be desperate for a win. To close a series of wounds on a high and to salvage some pride. The momentum however rests with Afghanistan. 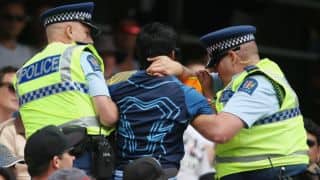