The match is going to be the decider as both teams have recorded two wins each in the series.

Afghanistan will take on Zimbabwe in the fifth and final match of the One-Day International (ODI) series at the Sharjah Cricket Association Stadium on Wednesday. Zimbabwe have come back strongly in the series winning the last two matches after having lost the first two games. Thus, the series is in balance at the moment 2-2. This fifth match is going to be the decider. In the previous match, Zimbabwe won the toss and elected to bat first. They got bowled out for 226 in 49.1 overs but they repeated their good bowling performance of the third Test match as they folded Afghanistan’s innings for a paltry 161, recording a 65-run victory. Chamu Chibhabaha bagged player of the match award for his four-wicket-haul. LIVE CRICKET SCORECARD: Afghanistan vs Zimbabwe 2015-16, 5th ODI at Sharjah

If Afghanistan wants to entertain any hopes of winning the final match and hence claim the series, they have to come up with a much better batting performance. Their performance with the bat has been poor in the last two games. In the third one day, they got out for a measly 58, presenting Zimbabwe with a 117-run victory. Afghanistan has to show resilience and probably take inspiration from the first two high intensity matches in which they finally stood victorious. They also defeated Zimbabwe in 2015 as well. LIVE BLOG: Afghanistan vs Zimbabwe 2015-16, 5th ODI at Sharjah

Zimbabwe would want to win this series and prove all those wrong who have the feeling that they are not competent to win against sides like Afghanistan, Scotand, Ireland and other associate nations. 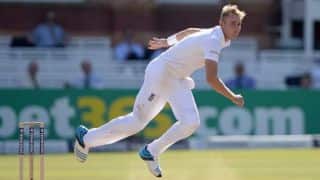