West Indies will be looking to score as many runs as possible before getting bowled out, if play resumes on the final day.

West Indies will hope to resume Day Five of the third and final Test against Australia at 248 for 7 at Sydney Cricket ground (SCG) if rain keeps away. Day Three and Day Four were completely washed out and one will hope that there some play left in the Test on the final day of the series. It has been a one-sided series so far with Australia having dominated throughout. They eased to an innings and 212-run win in the first Test and followed it up with a 177-run thrashing in the Boxing Day Test at Melbourne Cricket Ground (MCG). West Indies would have hoped to redeem some pride in the final Test, but that chance seems to have passed.  LIVE CRICKET SCORECARD: Australia vs West Indies 2015-16, 3rd Test at Sydney, Day 5

Kraigg Brathwaite with 85 is the highest scorer for West Indies in the innings. Carlos Brathwaite came in at No. 8 and provided some fireworks and got himself to a 71-ball 69 before he was cleaned up by James Pattinson. Pattinson and off-spinner Nathan Lyon have managed to pick up two wickets each in the innings so far and will be looking to add to their tallies, if play gets underway on Day Five. READ: Australia vs West Indies 2015-16: Rain abandons Day 4 at Sydney

It will be interesting to see West Indies’ approach on the final day. The might as well declare from here and let their bowlers have a go at the in-form Australian batsmen. They might also give their tailenders a few overs to go on the offensive and notch up as many runs as possible before they are bowled out. Australia have taken an unassailable lead in the series, and by the looks of it, they will win the series 2-0. 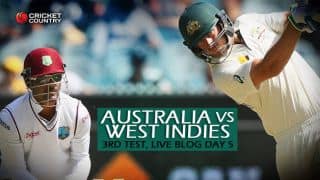 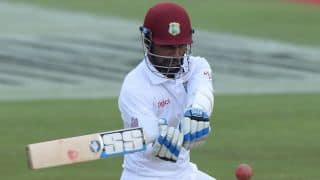