The Rajasthan Royals, eased to 26-run victory against Kings XI Punjab in their opening game.

Delhi Daredevils take on former champions, Rajasthan Royals in match 6 of the cash-rich, Indian Premier league (IPL) at the Feroz Kotla Stadium in Delhi on Sunday. This would be the second game for both the teams as Delhi come off after losing their opening game against Chennai Super Kings (CSK), while Rajasthan come off with a sensational opening win against runners-up of previous edition, Kings XI Punjab (KXIP). Live Scorecard: Delhi Daredevils vs Rajasthan Royals

In their opening game of the ongoing edition of the IPL, DD came excruciatingly close to sealing a victory against the Chennai Super Kings (CSK). On the back of a brilliant performance by Albie Morkel they almost sealed victory in their chase of 151, with the South African pacer scoring only four runs off the last delivery in which they needed six to win. Live Updates: Delhi Daredevils vs Rajasthan Royals

The Rajasthan Royals, on the other hand, eased to 26-run victory against Kings XI Punjab in their opening game thanks to an all-round performance from the team. The Royals had a horrendous top-order performance with openers Ajinkya Rahane and Sanju Samson falling for a duck and five runs respectively. Karun Nair then got out for eight runs. In the top order, only Steven Smith – the stand-in captain – did well scoring 33 runs. IPL 2015: Complete Coverage 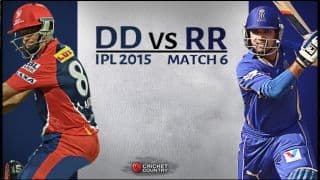 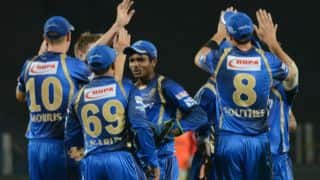