Scotland's confidence will be sky high coming into this match against Ireland.

Ireland face Scotland in the sixth and final match of the Dubai Triangular series. This match is the final competitive match for both these teams before heading to Australia and New Zealand for the ICC World Cup 2015. Ireland have generally been dominant in the tournament thus far winning two out of three matches. Their loss in the previous match may well have been an aberration, specially if they are able to pull off another win against Scotland in the final match of the series. The Irish have not had any hundreds from their batsmen thus far, the highest score being Niall o’Brien registered the highest score of the tournament which was a match winning unbeaten 80. Captain William Porterfield has been woefully out of form where as marquee players such as Kevin o’Brien haven’t fired either.

Scotland’s confidence will be sky high coming into this match against Ireland. They beat Afghanistan by a massive margin of 150 runs in their previous match which was their first win of the tournament. They’d be keen to carry the momentum forward with the ICC World CUp 2015 just a whisker away. They’d also be keen to turn the tables on the Irish considering Ireland had triumphed in their previous encounter by a narrow margin of three wickets. 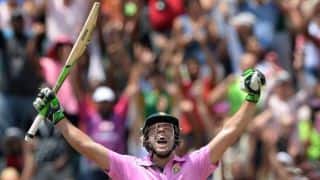