The West Indies will aim to bounce back after their 61-run loss in the first One-Day International (ODI).

The West Indies will aim to bounce back after their 61-run loss in the first One-Day International (ODI), when they take on South Africa in the second game at the Wanderers Stadium in Johannesburg on Sunday. Catch live cricket scores and ball-by-ball commentary of the second ODI between South Africa and West Indies here

In the first match of this series, Dale Steyn ended a short but brutal rampage by Chris Gayle to open the way for South Africa to beat the West Indies in a rain-affected first one-day international at Kingsmead on Friday.  The hosts won by 61 runs according to the Duckworth/Lewis method when the tourists were bowled out for 164. South Africa made 279 for eight before their innings was cut short by rain after 48.2 overs.

Chasing a reduced target, which eventually became 225 runs off 32 overs after another brief interruption, Gayle led the West Indies to a storming start as he and Dwayne Smith put on 51 for the first wicket inside the first six overs.

Gayle, who played match-winning innings in both Twenty20 internationals he played in ahead of the one-day series, swung at almost everything as he made 41 off 24 balls, with two sixes and five fours. 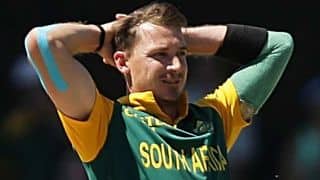