If Haiti manage to pull off a win, it will be considered as one of the biggest upsets in football.

Hello and welcome to the live coverage of the group B match of the Copa America 2016 between Brazil and Haiti at the Camping World Stadium at Orlando. Brazil have not been able to live up to their expectations on the big stage in the recent past, but this tournament could be their opportunity to put this all to rest. They have a golden opportunity to start this tournament with a convincing win against Haiti, who do not boast of many star players. Brazil are one of the most successful teams in football and with the sort of quality they have in their side, they should be able to make significant progress in the tournament.

90 mins+2: Brazil have completed an incredible win win and it is Philipe Coutinho, whos is the star with a hat-trick. Brazil start the tournament very will.

80 mins: GOALLL! Both Brazil and Haiti get one goal apiece. Haiti’s goal will eventually turn out to be nothing but a consolation. Haiti could however do themselves a world of good, if they manage to get another goal from somewhereBrazil will not be happy conceding that goal though.

65 mins: GOALLLL! Gabriel puts Brazil 4-0 ahead. It was a clinical finish from the striker, who was given the ball in a good position and he struck the ball powerfully across the goalkeeper. Gabriel has now scored two goals in his three international appearances so far.

55 mins: The second half is underway and Willian has had the best chance of the half so far. His shot from the right side goes across the face of the goal, narrowly wide of the far post. Haiti have not conceded a goal in the second halg yet.

45 mins: It’s half-time and a brace from Coutinho and a header from Augusto put Brazil firmly in command. Brazil will look to add a few more in the second half as well.

30 – #Coutinho is the first #Brazil player to score a #CopaAmerica brace in the first 30 minutes, since Rivaldo in 1999 v Uruguay. Magic

35 mins: GOALLLL! it is Augusto, who scores the third with an good header after he is unmarked. Dani Alves sends in a cross from the right after Haiti give the ball away. No way back for the minnows from here.

30 mins:GOALLLL! It’s Couthinho once again for Brazil! Some shabby defending from Haiti gives Jonas the ball inside the six yard box, who then squares the ball to Coutinho and it is a simple tap in or the Liverpool man from there. That will perhaps be the most easiest goal he will ever score. Coutinho now on a hat-trick!

25 mins: Phillipe Couthinho has looked the brightest player on the pitch so far. Brazil are pushing for their second goal, which will put them in a good position. Haiti have looked to attack on a couple of occasions but the Brazilian defence has proved to be too good for them.

Missed the excellent goal from Coutinho? Here it is:

Coutinho with an absolute rocket. Wondering if the net needs to be restitched. #CopaAmerica

15 mins: GOALLLLL!!! Brazil are playing a pressing game, but are not able to make a good final pass. Coutinho has a shot at goal but that does not trouble the goalkeeper at all. But then he made amends with a stunning strike, cutting in from the left side to give the goalkeeper no chance.

5 mins: It has been a stop-start beginning to the game. Haiti have been giving away silly free kicks, but Brazil have not been managed to make any sort of impact in the match so far. Hopefull they will get better as the game progresses.

Brazil will host the Copa America 2019 and it would be an icing on the cake if they were to play the tournament on their home soil as the defending champions. The likes of Dani Alves, Lucas Moura, Coutinho, Willian and Hulk will be some of the key players for Brazil.

Haiti on the other hand can go all guns blazing against the former champions and five-time World Cup winners. If they do manage to beat Brazil, it will surely be considered one of the biggest upsets ever. Haiti do not have players, who boast of players representing big clubs. But the Indian fans may be excited to know that midfielder Sony Norde plays for Mohun Bagan in the I-League and will be eagerly anticipating to see him in action. Whether he starts or not will have to be seen 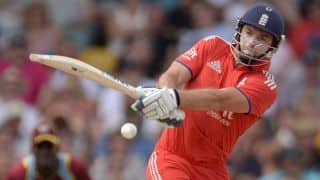