Brazil is coming off a superb 7-1 match which was against Haiti in Copa America 2016.

Hello and Welcome to CricketCountry’s live coverage of Match 20 of Copa America Centenario 2016 which is being played between Brazil and Peru. The venue of the match is Foxborough’s Gillette Stadium. Brazil and Peru have been played in Group B of Copa America 2016 along with Haiti and Ecuador. This is Brazil’s third game in the group stage level. They were first held at a goal-less draw by Ecuador before they thrashed Haiti by 7-1. On the other hand, Peru began their Copa America 2016 campaign by a 1-0 win over Haiti and then drew their second game 2-2 which was against Ecuador.

That’s it for today! Peru beat Brazil by 1-0 by a controversial goal from Ruidiaz (which was an undetected handball). We will be back with more Copa America coverage tomorrow. Till then, Goodbye!

90+6 mins: Peru made history today. The crowd goes berserk! Brazil couldn’t believe their luck. The goal scored was a clear handball from Ruidiaz which went undetected by the on-field referees.

90+4 mins: Peru almost scored their second goal. Oh Ramos! You missed that one. A win is in waiting for Peru now as the extra time draws close to its end.

Renato Tapia come on the field. Peru trying to get their lead intact till the end of Full Time.

90 mins: 6 minutes of added time. Brazil will surely look to take advantage of that looking for an equaliser.

88 mins: Yellow card in offering for Renato Soares de Oliveira Augusto. Peru survived a scare as they got Yotun down on the ground trying to launch a counter-attack

88 mins: Brazil trying to get something out of the corner now. Dani Alves takes a desperate shot but it gets deflected by Peru’s defenders. The keeper picks it up comfortably. Brazillian players look frustrated.

86 mins: Brazil are running short of time. They only realised that after a goal from Peru. They are trying hard to net one but have failed so far. On the other hand Peru are in defense mode trying to keep the lead till full-time.

84 mins: Brazil haven’t lost 15 of their previous Copa America matches (under 120 minutes). They will be losing to Peru after four easy wins in Copa America. Brazil are looking furious now trying to get an equalizer. Gil almost scores his first goal via Willian’s free kick. Brazil are attacking now with full force for the first time in the match. What took them so long?

80 mins: The on-field decision stands as Peru are given the goal. Nobody on the field noticed that Ruidiaz got a hand on the ball before netting it for a goal. Will this be the new “Hand of God”. Peru survives!

79 mins: Brazil had it coming! Polo did brilliant as Ruidiaz finished the job with ease. Wait! Brazil are appealing for a handball now. Will this goal be reversed as referees get talking? Peru might be denied a historic goal!

77 mins: Peru have pulled off the inevitable. They have taken a lead against Brazil. Polo serves the ball towards Ruidiaz who guides it towards the nets. This is the biggest upset of Copa America so far. Will Brazil be able to make a comeback now.

73 mins: Substitutions: Gabriel Barbosa Almeida walk out to make way for Givanildo Vieira de Souza. Will this be the turning point of the match. Let’s see.

70 mins: Yellow card issued to Lucas Rafael and Araujo Lima. It wasn’t a rough challenge intentionally but got the booking.

68 mins: Peru have got the ball into possession for a long time now. Its time they start taking chances and try their luck to covert them in goals. Possession won’t win them the match. Goals will do. They have to score a goal before Brazil launches a counter-attack on them.

66 mins: Peru are looking good with each passing moment, winning the ball on almost every occasion and putting pressure on Brazil. Rodriguez and Ramos have been spectacular in the field today, giving Brazil no chance to tunr the tables in their favour.

64 mins: Substitutions: Edison Michael, Flores Peralta go off the field as Raul Mario and Ruida Misitich walk into the ground.

61 mins: Brazil haven’t lost a single game to Peru in the last four matches they have played. They have won the match by a margin of two goals at least.

59 mins: With the passing of time Brazil are looking more and more vulnerable now. They haven’t been able to gain possession of the ball for a little while and a loss looks evident now. They don’t have much options now after the suspension of Casemiro.

57 mins: Brazil are getting restless now as Peru have been a better side in the game so far and one goal might be the evidence of that as the game ends. Elias and Renato have been shaky in the midfield and we should expect changes from the Brazillian manager any minute now. Brazil wouldn’t want to go home before knockout stages of Copa America.

55 mins: Not a good effort from Cueva takes the free kick as he decides to take on the goalkeeper himself. He doesn’t give a chance to his teammates and misses the goal post by a margin. the ball is off to a goal kick. Should have got a better result out of that free kick. Cueva is disappointed. So are we.

54 mins: To everyone’s surprise it seems like Brazil is taking a beating from Peru.They have been in attacking mode right after the first half. Miranda concedes yet another free kick. This might be dangerous for Brazil. The angle is steep but players are lining up to convert this chance into a goal.

49 mins: It’s hard to believe but Brazil survived a scare just now. Allison makes a crucial save here. Cueva was up for the job and guided the ball to the near posr but was stopped by goalkeeper’s brilliant efforts. Peru on an all out attack here.

48 mins: Peru desperately trying to get a goal here. They are taking strides forward attacking Brazil. Guerrero seems helpless as there was too much on the cross from Flores.

45 mins + 2, HALF-TIME: This time Peru is DENIED A PENALTY. Earlier Brazil were said to continue the play 4 four time, this time Peru taste the same treatment. Flores is clearly tripped up in the area by Renato Augusto. The referee was right there but he doesn’t award the decision! Two more minutes added.

33 mins: Another blow for Peru. Guerrero is off the pitch following an injury stoppage after a collision with Gil.

27 mins: INCREDIBLE SAVE! Gabriel again, who takes the ball away from Peru at the back. An excellent piece of football from him as they goes pass through the Peru defenders and goes for a shot to the post from far. In reply, the Peru goalkeeper surely was no injured, he dives to his right to make a sensational save.

23 mins: Injury concern for Peru ad their goalkeeper Gallese goes down following a collision with Guerrero. The goalie doesn’t seem hurt much.

NOTE: The history is with Brazil as these two sides have met 16 times in the Copa America and Brazil lead by 11 wins to two, with three draws.

19 mins: Again NO PENALTY GIVEN. The TV commentators are being heard taking two names more often in this match and they are of Coutinho and Gabriel’s. The Liverpool man is brought down inside the box under Ramo’s challenge. That was a decent appeal as Peru are giving away the possession easily and are throwing themselves under immense pressure.

13 mins: Filipe Luis this time. Makes lovely contact for a goal from 20 yards but Gallese pushes it behind and Brazil get a corner here. Brazil continue to counter attack, corners are really dangerous for Peru and they are surely not very happy about it.

11 mins: Gabriel has already begun giving Peru’s defenders some tough time. Although he has not created a real chance so far but that chance doesn’t seem very far with the way he is playing now. Brazil are slowly picking up and Peru will not like that.

NOTE: Their last meeting in this competition was in June 2015 when Brazil won 2-1. Prior to that game, the Brazilians had kept a clean sheet in six consecutive Copa America games against these opponents.

5 mins: Brazil and Peru are quite familiar to each other and which is why one side dominating the other right from the early stages will be difficult. Here it is Brazil have their first attack, however which goes in vain as Dani Alves goes down inside the box. No challenge given.

A win in this game against Peru will seal a spot quarter-final spot for Brazil in Copa America 2016. Dunga’s side has regained their lost form at the right time, beating Haiti 7-1 in their last game. Liverpool’s Philippe Coutinho scored a hat-trick while Renato Augusta netted a brace to relieve the pressure off coach Dunga after the draw in their opening match. 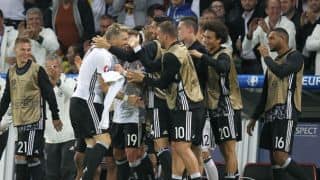