France and Romania are set to play the opener of Euro 2016.

Hello and Welcome to live coverage of Group A match of Euro 2016 which is being played between hosts France and Romania. It is the opener of the tournament and will be played at Stade de France, the home stadium of France national football team. France’s history speaks volumes about their dominance at home. Out of their three major titles — Euro 1984, 2000 and FIFA World Cup 1998 — victories in 1984 and 1998 came on the home soil. France will be led by their goalkeeper Hugo Lloris, who also captains his English Premier League club Tottenham Hotspur. On the other hand, Vlad Chiricheș will wear the armband for Romania. The defender is also a member of the Italian club Napoli. READ: Euro 2016, France Vs Romania, Prediction & Preview, Group A, Match 1 at Saint-Denis

90 + 3 mins, FULL TIME: The hosts have begun their Euro 2016 campaign ins style. What strike from Payet. He was removed at the end of 90. The West Ham United mid-fielder was seen wiping his tears on the bench, incredible effort from the 27-year-old. Although the French were poor in the defending department for most of the match, they managed to seal the game. As former French legendary footballer Thierry Henry tweeted, “Let’s not forget Romania played really well. They are unfortunate and have lost because Dimitri Payet happened.”

89 mins: Dimitri Payet collects the ball 30 yards away from the box, completely unleashes himself on the Romanian attack and sends it to the top corner of the Romanian net. The keeper was unmoved. Payet does it in style! The hosts are close to a superb victory in the opener of Euro 2016.

64 mins: GOAL! Patrice Evra brings Nicolae Stanciu down insode the box and Romania receives a penalty. Bogdan Stancu does it cooly. The Romanian goolie goes the wrong way and it is 1-1 at Stade de France.

57 mins: GOAL: The French and Arsenal striker Oliver Giroud finally scores for France! The crowd goes wild, what scenes at Stade de France. Dimitri Payet clips the ball into the box, Romanian keeper stops that well but a rebound that is collected by Giroud heads it straight into the nets!

50 mins: The second half has begun in the same way as the first, Romania once again seem dangerous for the hosts. Nicolae Stanciu finds space at the edge of the box in the 48th minute, he passes the ball to Bogdan Stancu inside the box, who misses it and the ball goes wide of the goal. The French defenders continue to be clumsy.

HT: Two minutes extra-times, still no goal! Star of the first half Pogba continued his job of creating chances, but never managed to put the ball into the net. In the 43rd minute he came close to putting France 1-0 up but miscued it. Two minutes later, Romania man Razvan Rat gets booked with a YELLOW CARD for a kick into the face for Olivier Giroud while challenging for the ball. Meanhwile, French defenders have not been at their best. If their clumsy defending continues, Romania might score in the upcoming second half.

16 mins: Paul Pogba into action, is being seeing with the ball a lot in the last couple of minutes. The Juventus mid-fielder tackles three Romanians into the box as he passes it to full-back Bacary Sagna who has shot at the goal but misses it. A more of Pogba is seen who is trying to set the momentum for his side. Romania know they have to stop that.

6 mins: SAVE! Less than six minutes, France would be trailing had their skipper and goalkeeper Lloris not made this excellent save. It was a free kick for Romania, Romanian striker Nicolae Stanciu goes for a freek kick from six yards but it is blocked by Llrois. A rebound was collected from Florin Andone, whose header missed as it hit the crossbar. What a start by the Romanians, France surely are more alert now.

After all the build up about Euro 2016, we are finally about 15 mins away from the kick-off of the grand opener between the hosts France and Romania. The opening ceremony is underway at the moment at Stade de France, with 150 can-can dancers performing.

France’s line-up is surely a more star-studded one when compared to their opponents of the day. France’s playing XI will consist of six English Premier League players and two former ones in Patrice Evra and Paul Pogba. Only two players from the Romanian squad had a small stint in the English clubs. The skipper Chiriches was a part of Tottenham from 2013-15, while their left back Răzvan Raț played 15 games for West Ham United for a single season in 2013.

Romania was one of only four nations to go through qualifying unbeaten, conceding just two goals. #Euro2016 #FRAROU #Rou 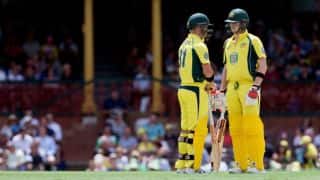