Hello and Welcome to CricketCountry’s live coverage of the UEFA Euro 2016, Group D, Match 8 between defending champions Spain and Czech Republic at the Stadium Municipal in Toulouse on Monday. I am Ayush Gupta, and I will be bringing to you the live updates from this tie. Coming into the 2016 tournament Spain will aim to make a treble of wins in the able guidance of Vincent del Bosque, who will aim to win his second Euro medal and his third championship medal for Spain after 2010 FIFA World Cup and 2012 Euro Championship. Spain are place in Group D along side Czech Republic, Turkey and Croatia.

Andr s Iniesta is the @carlsberg Man of the Match 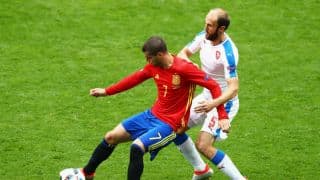