Sri Lanka won by 199 runs. It could have been worse, but for a 123-run stand between Theunis de Bruyn and Temba Bavuma.

Sri Lanka wrapped up the second Test (and with it, the two-Test series) against South Africa at Sinhalese Sports Club, Colombo, 11 overs after lunch on Day Four. Chasing 490, South Africa were eventually bowled out for 290, thus losing by 199 runs. It could have been worse, for South Africa were reeling at 113 for 5 in the final session on Day Three. However, Theunis de Bruyn (101) and Temba Bavuma (63) added 123, delaying the inevitable till Rangana Herath broke through before lunch. Herath finished with 6 for 98, his 34th five-wicket haul.

Herath first had Bavuma caught behind. Then, at the stroke of lunch, he had Quinton de Kock leg-before with one that turned almost across him. Shortly after lunch, Kagiso Rabada stepped out and lofted Herath for a humongous straight six.

De Bruyn swept Herath very fine for four to bring up his maiden Test hundred. Four balls later Herath undid him with the left-arm spinner’s one-two trick. He tossed one up and the ball beat de Bruyn’s bat as he groped forward in defence. De Bruyn failed to read the next delivery; he shouldered arms as the ball hit off.

Player of the Match: Dimuth Karunaratne.

Player of the Series: Dimuth Karunaratne. 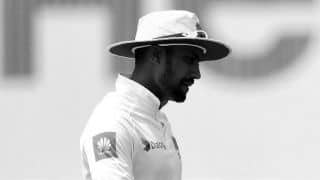 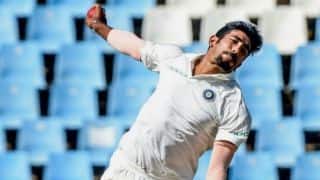