Trinidad & Tobago have beaten Cape Cobras by two wickets in a must-win match which saw a nail-biting finish. 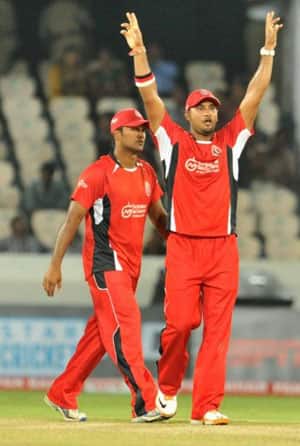 Trinidad & Tobago have beaten Cape Cobras by two wickets in a must-win match which saw a nail-biting finish.

Earlier after winning the toss, Cape Cobras elected to bat first and were restricted to score of 137 runs by a disciplined bowling effort by Trinidad & Tobago.

T&T fielders supported bowlers well on a damp wicket which did not assist the seamers. Dane Vilas lead the fightback for Cobras with an elegant fifty. He was supported by England s Owais Shah who scored runs.

In their reply, Trinidad & Tobago lost early wickets and were never allowed to build a partnership by Cobras bowlers.

But a spirited fight back by Kevin Cooper in the death overs saw the T&T chase the target with two balls to spare.

Cape Cobras are out of contention for the semifinals.

Chris Gayle is an impact batsman for us: Virat Kohli