Catch the live scorecard of the 1st ODI between Ireland and Scotland here.

Irleand welcomes Scotland for a three match One-Day International (ODI) series. They will face each other in the first ODI at The Village, Dublin on Monday. Rain might disturb the course of the game in the later half of the match but the game is on its way. This will be Ireland’s first international game after they lost to Sri Lanka in July. Catch the live blog of the match here

Fast bowler John Mooney come back to the Irish side alongside their skipper Kevin O’Brien, spinner George Dockrell and pacer Max Sorensen. Unfortunately, their opener Ed Joyce will not be available for this series. On the other hand, Scotland with no surprise will be counting on Majid Haq and Richie Berrington for their experience. This ODI series will be a good tour for both the teams as they can select their final team before they set off for Australia and New Zealand for the ICC World Cup. 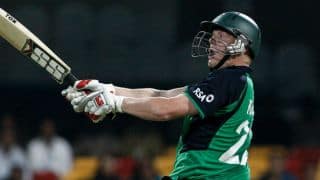